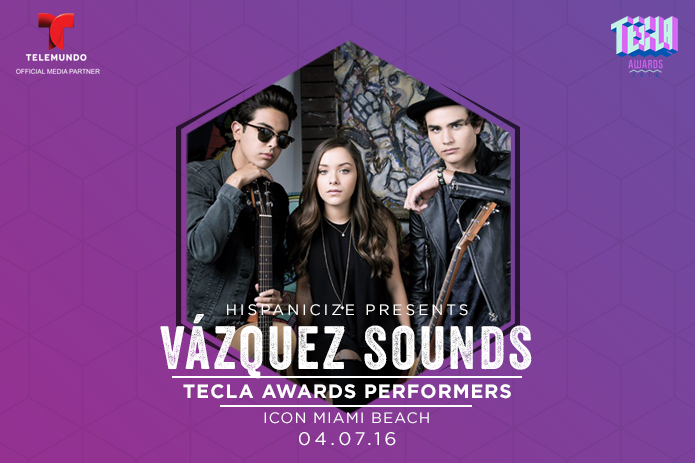 Formed by Mexican siblings Abe, Gustavo and Angela “Angie” Vázquez, the group is known for their cover of the Adele song “Rolling in the Deep”, which received over 178 million hits, becoming an instant internet sensation, and even earning them air time on Spanish-language television, CNN en Español, VH1 and Good Morning America.

Confirmed hosts of the 2nd Annual Tecla Awards show are Telemundo’s Jorge Bernal and TV personality Julissa Bermudez. Presented in partnership with TELEMUNDO, the star-studded Tecla Awards gala will take place on Thursday, April 7th during Hispanicize Week at Icon in South Beach and for the first time will be internationally live streamed.

“Vasquez Sounds are the perfect group to kick-off the Tecla Awards. With over 380 Million YouTube views and undeniable talent, they epitomize what our event is about,” said Music Director and Hispanicize Partner, Katherine Johnson Gunn. Not only have these millennials gained a worldwide fan base they’ve also done successful branding campaigns with large corporations & brands.”

Vazquez Sounds rank third highest in YouTube subscribers of any Mexican Artist. They have recorded more than 30 tracks, and reached various #1 positions on iTunes. In addition, their Album and single releases have received Gold and Platinum status. In September 2015 they received their first Latin Grammy nomination in the category of Best New Artist. In the last three years the group has been touring Mexico and are now in talks with booking agents and promoters for upcoming Asian, European, and South American tours.