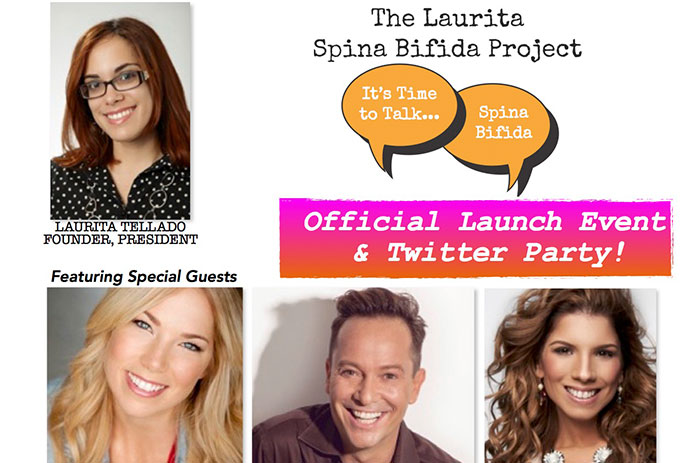 Laurita Tellado, writer, blogger, editor, voiceover talent and lifelong activist, is proud to announce the star-studded launch of The Laurita Spina Biﬁda Project, Inc., (The LSB Project) a non-proﬁt organization, as well as its partnership with Hispanicize during their 2016 event in Miami.

The LSB Project is unique in its unprecedented focus on the quality of life of people living with spina biﬁda. This will be the organization’s ﬁrst ofﬁcial public event since its creation in 2014. In October 2015, Tellado met informally with a group of adults with spina biﬁda in Paris, France, where she was interviewed by the French Spina Biﬁda Association (ASBH, in French).The ofﬁcial launch event and simultaneous Twitter party is set to take place on April 6th at 5:00 PM EST, and will feature special celebrity guests Gaby Natale, Martín Llorens, and Pili Montilla during a Happy Hour at

The ofﬁcial launch event and simultaneous Twitter party is set to take place on April 6th at 5:00 PM EST, and will feature special celebrity guests Gaby Natale, Martín Llorens, and Pili Montilla during a Happy Hour at Toro Toro Miami inside the trendy, chic InterContinental Miami hotel near Biscayne Bay.

“On behalf of our volunteer board of directors and myself, we are so thrilled and grateful to have the support of the Hispanicize community in introducing this project to the world,” said Laurita Tellado, Founder and President of The LSB Project. “As an adult living with spina biﬁda myself, I am keenly aware of many of the issues that personally affect this community, and are not being adequately addressed or emphasized by other organizations. The LSB Project is the culmination of a childhood dream of mine, and it will be incredible to be able to share it with everyone on none other than the Hispanicize stage, with the support of some of the most prominent His-panic and non-Hispanic inﬂuencers in the nation.”

Tellado will participate in a panel discussion on Friday, April 8th, Leveraging Our Multicultural Inﬂuence for Commerce, Justice, and Social Good presented by The Calvert Foundation, at Hispanicize 2016.

She has been an activist for raising awareness of spina biﬁda since the age of 10, and in 2009, Tellado launched the blog “Holdin’ Out for a Hero,” to share her crusade on a digital platform.

Spina biﬁda is a neural tube defect that leaves an opening in the underdeveloped spine at birth. It is more common than muscular dystrophy, multiple sclerosis, and cystic ﬁbrosis combined.

“Hispanicize is proud to support Laurita Tellado in launching The Laurita Spina Biﬁda Project. Laurita has been devoted to helping people impacted by spina biﬁda for many years and I know she will be a dynamic champion for this condition that disproportionately affects Latinos more than any other ethnic group,” said Manny Ruiz, CEO and founder of Hispanicize, which in-cludes the annual Hispanicize event (www.HispanicizeEvent.com).

When asked about why she decided to start a non-proﬁt, Tellado explains it’s all about creating community.

“I’ve been contacted from adults with spina biﬁda, and parents of children with spina biﬁda, from across the globe,” Tellado said. “Almost unanimously, they have all expressed a keen desire to connect with someone else who is experiencing the same things they are. That’s what The LSB Project is about— creating a global community while educating the public, as well as health care providers, about the most pressing issues we face. These include social isolation and depres-sion. And the only way to address these issues adequately is to create a multimedia campaign to shed light on that which isn’t discussed openly.”

The LSB Project recently started a crowdfunding campaign on Indiegogo’s Generosity site to raise funds for what will be a global, multimedia, multilingual, and multicultural awareness cam-paign.

Hispanicize will hold its seventh annual event for content creators and inﬂuencers in Downtown Miami, April 4-8, 2016.

“Having the support of the Hispanicize community means everything to me, and to the spina biﬁda community,” Tellado said. “It means getting our message out in front of thousands of jour-nalists and inﬂuencers, and also educating the most commonly affected demographic. Chances are someone else at Hispanicize will know someone who is touched by spina biﬁda, and just having the knowledge that someone else can relate is pretty powerful.”