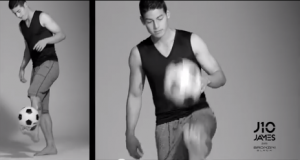 James Rodriguez, the Colombian sensation discovered by the world during Brazil’s World Cup, is making headlines again, and tons of money, without touching the ball: the new Real Madrid midfielder who inked a $100 million deal with the Spanish team has become the new face of Bronzini Black underwear and even has his own line, called J10 James.

“We chose James Rodriguez as [the] Bronzini Black image as a man of style, self-confident and is always surprising,” Martin Nova, VP of Marketing of Grupo Exito, told El Tiempo newspaper.

According to the paper, the photo shoot took place in the city of Medellín and lasted nearly five hours. Some 2,000 pictures were taken, showing the 23-year-old in 15 different styles of underpants.

Undocumented patients wary of offers to return to home countries