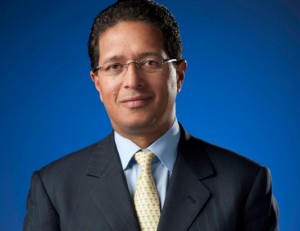 Vme TV is proud to announce that Vme TV’s CEO, Eligio Cedeño, will be honored as the “2014 Businessman of the Year” by the United States Hispanic Chamber of Commerce (USHCC). Cedeño will be recognized during the USHCC National Convention on September 23rd in Salt Lake City, Utah.

“Being named the USHCC ‘Businessman of the Year’ is a great honor as it signifies that the work we do at Vme TV is touching lives nationwide,” said Cedeño. “We at Vme TV will continue to drive the narrative that Hispanic Americans play a pivotal role in the success of this country and should have access to media content that reflects who we truly are as a community.”

Each year, the USHCC recognizes an executive whose outstanding leadership, pioneering spirit, and social and economic contributions exemplify the best of America’s Hispanic business leadership. As the CEO of the country’s largest minority owned network, Cedeño has demonstrated a unique vision and commitment to providing the Hispanic American community with educational, entertaining, inspiring and enriching media content that is geared toward empowering Hispanic Americans and promoting upward mobility in the Latino community.

“During his tenure at Vme TV, Eligio has devoted his time, resources, and passion toward educating and inspiring young children and families with quality television programming. Driven by his personal journey, Eligio recognizes the cultural challenges faced by many, and has leveraged the power of media to help break down barriers for America’s Spanish-speaking viewers,” said USHCC President & CEO Javier Palomarez. “We commend Eligio for offering his talents in service to the Hispanic community and our nation as a whole, and are proud to recognize him as the 2014 Businessman of the Year.”

Cedeño, who moved to the United States from Venezuela four years ago, has witnessed firsthand how the lack of access to credible and trustworthy media sources can negatively impact communities at large. This experience led him to seek the opportunity to spearhead Vme TV in 2013. Under his leadership, the channel has successfully positioned itself among industry leaders and consumers as the go-to source for quality, family friendly, Spanish-language content in the United States.