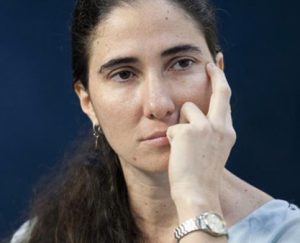 During her visit to the Hispanicize 2014 conference in Miami, Florida, Alonso Castillo had the opportunity to interview Yoani Sanchez, who talked about her role as the digital and social voice of Cuba – a country that, for over 50 years, has suffered from oppression through censorship of media and lack of freedom of the press. She comments on the country’s long-standing dictatorship along with her experiences and her point of view regarding whether social media will ever evolve in the struggling country and what its role may be in the future.

Sanchez has achieved international fame and received multiple awards for her critical portrayal of day-to-day life in a communist country like Cuba. Her writings have been published by renowned media sources such as the Huffington Post, which have applauded her for her dedication to opening communication channels, despite the technological obstacles and governmental threats that prevent the freedom of speech of the Cuban people.

“Vme Entrevista: Yoani Sanchez” forms part of a yearlong series of interviews with influential leaders who are doing their part to make the world a better place. Other notable personalities featured previously in the series include award-winning actress, Rita Moreno and former President of Poland and Nobel Peace Prize recipient, Lech Walesa.

Two in Five Mobile Owners Use Internet on the Go