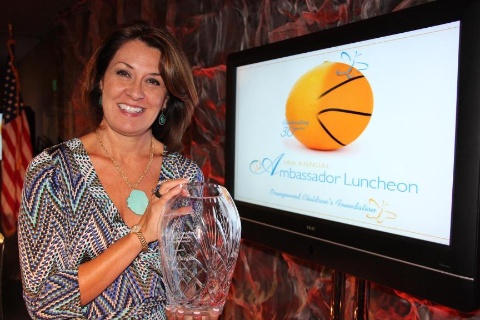 Named after Orangewood’s founding Board Chairman General William Lyon, Vargas is only the ninth recipient of the award. This recognition is given to individuals who have given his or her time and resources and who reflects the unending commitment to Orange County children.

Vargas has been committed to the cause of abused children for more than 15 years. She has served on Orangewood’s Board of Directors since 1996. She is a co-founder of Orangewood’s Guardian Scholars Program at California State University Fullerton, a partnership between the organization and local universities that provides college scholarships and on-campus support to former foster youth who want to achieve their dreams of a college education. The program provides on-campus support to these young adults who don’t have the benefit of the guidance and resources of family.

“Vikki has a true passion for our kids. She has been an active and respected member of our board and deeply admired by the staff and college students,” said Cal Winslow, chief executive officer of Orangewood Children’s Foundation. “She was a natural selection for this award and we are proud to honor her for the many years of service and the accomplishments she has achieved on behalf of the organization.”

Vargas is NBC4’s Orange County Bureau Chief, overseeing all news gathering operations for the station in Orange County. She joined NBC4 in July 1982 as a general assignment reporter, and has been stationed in and covered Orange County’s major news stories since 1984. Vargas has won numerous awards for both her professional achievements and community involvement, including the prestigious National Hispanic Media Coalition’s Lifetime Achievement Award, California State University Fullerton’s Vision & Visionaries Award, Hispanic Americans for Fairness in Media Avance Award, a Golden Mike and an Orange County Press Club Award for “Best News Reporting.”