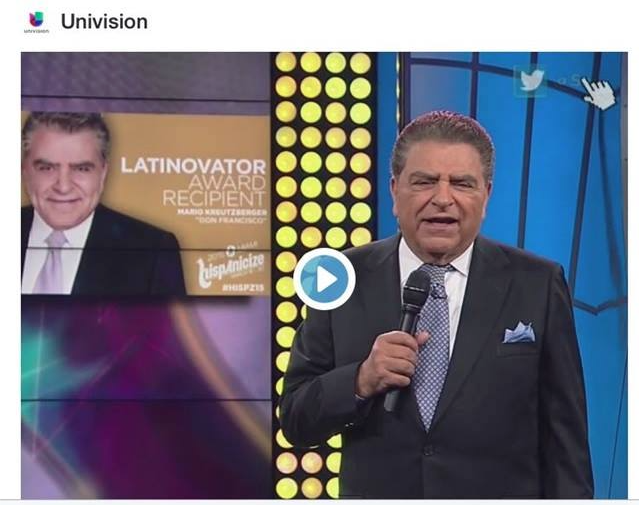 Univision announced today that after a run of more than 53 years, Univision Network’s top-rated variety show, “Sábado Gigante” (Giant Saturday), hosted and created by Don Francisco, will end its current cycle on Sept. 19, 2015 to coincide with the end of the 2014-2015 broadcast television season.

Don Francisco will continue contributing to the Univision Network with new projects and by hosting entertainment specials and campaigns such as “TeletónUSA,” which is held every year on behalf of disabled children. He will also take part in Univision’s ongoing efforts to look for and develop new on-air talent and professionals.

Ever since “Sábado Gigante” first launched in 1962 on Chile’s Channel 13, Mario Kreutzberger (Don Francisco) has been capturing the hearts of his loyal viewers, making important contributions to the development of families and delivering entertainment as creator and host of a program that has beat all broadcasting longevity records.

Thanks to the tireless work of Don Francisco and his team of professionals, who have creatively adapted to the changes in television over more than half a century, the show is still No. 1 on Saturday nights among Hispanics and has made history in the U.S. television industry. There’s no doubt that the dynamic mix of humor, amateur talent contests, audience games, human-interest stories, celebrity interviews, emotional family reunions, and the presence of some of the biggest Latin music stars have granted “Sábado Gigante” over the past five decades the privilege of becoming an indisputable milestone in the history of international television.

“During my 40 years in the industry I have met few people with the same energy, creativity and passion for television and the audience as Mario, and I join in celebrating him and his team at ‘Sábado Gigante’ for the great success and the milestones achieved in broadcast television,” said Randy Falco, president and CEO of Univision Communications Inc. “Mario is an important part of the Univision family, and his knowledge of the industry and commitment to innovation will help us to continue defining the future of the media industry.”

Alberto Ciurana, president of Programming and Content for Univision Communications Inc., commented, “Mario is one of the most beloved and legendary entertainers in the world and has been an innovative and inspirational force in the television industry throughout his career. Mario’s uncanny ability to connect with audiences has transformed how we look at variety shows and allowed ‘Sábado Gigante’ to endure the test of time, making it not only Univision’s longest-running program, but also the longest-running variety series in television history. For so many in the Spanish-speaking community, Don Francisco’s weekly three-hour show defines Saturday evening entertainment, and I want to thank him and the incredible team for their outstanding work.”

Ciurana continued, “We are so thankful to have Mario as part of the Univision family. We are grateful that he will be continuing his relationship with us on upcoming Network specials and through ongoing support of our talent development programs. ‘Sábado Gigante’ will forever be a staple in Hispanic television history, and we join Mario’s fans in wishing him all the best as he enters his next chapter.”

Said Mario Kreutzberger, “I’m excited to share with the audience this announcement, with which we’re starting to bring to a close the 53-year cycle of ‘Sábado Gigante,’ 30 of which were possible thanks to Univision in the United States. There is no doubt that they have been fundamental in my professional development and in my personal and family life. I’m so grateful for the opportunity that Channel 13 of the Universidad Católica de Chile gave me as I was starting out, to Univision in the United States and also to the Televisa Network, which allowed us to bring our ‘Sábado Gigante’ into the homes of millions of families in the United States and the world every week. I have no words to thank our viewers for the support, loyalty and enthusiasm with which they have honored us through the years and which have allowed the show to become an unprecedented success in the history of this medium. Special and warm thanks to the outstanding production team, technicians, artists and behind-the-scenes collaborators, because without their efforts and sacrifice, we would have never reached this impressive goal. Over the past five decades, hundreds of professionals have been part of our ‘Sábado Gigante’ team, which allowed for the first 24 years of accolades in Chile, and the following 30 years of success in the United States and the world.”

Kreutzberger added: “From the start we made sure to ask, ‘What does the audience want?!’ And we have worked tirelessly for precisely that audience, with the utmost dedication, humility and deep respect. I have no words to acknowledge all the recognition and applause that we have received over the years. When we began in the United States in 1986, we told them that we were ‘separated by distance and united by the same language.’ Today I can say with great pride and satisfaction that that distance turned into closeness and affection. To all those who joined us by tuning in to ‘Sábado Gigante’ with their constructive criticism, work and loyalty, I would like to say from the bottom of my heart and in capital letters, THANK YOU VERY MUCH.”

Why Are Hispanics Missing in Leadership at Media Companies?

Resources Are Now a Big Issue for Social Media Marketers