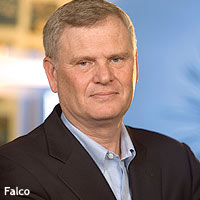 Man Once Poised to Lead NBC Aims to Lead Ad Dollars Away From Network, Saying Marketers Would Be Wise to Invest In More-Viewed Hispanic Shows Randy Falco, the former NBC Universal honcho named Univision’s chief executive last year, has been making a bold pitch to ad buyers: The number of consumers between the ages of 18 and 49 watching such programs as “La Fuerza Del Destino” is growing, so why not take the ad money you give to NBC and other English-language broadcast networks and give it to us?

A print campaign that takes a direct shot at the Peacock Network is slated to launch March 19. One headline reads, “Guess how many nights we beat NBC in 2011?” The answer is handily provided in the ad: 195 (in prime-time audiences ages 18-to-49).