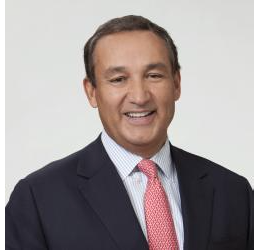 United Continental Holdings, Inc. today announced that it has named Oscar Muñoz as president and chief executive officer. Munoz will also continue to serve on United’s board of directors. The board appointed Henry L. Meyer III, United’s lead independent director, to serve as non-executive chairman of the board of directors. The company also announced that Jeff Smisek has stepped down from his roles as chairman, president and chief executive officer, and as a director. These changes are effective immediately. Munoz brings to this role deep and broad experience in the transportation industry and large

consumer brands including AT&T, Pepsico and The Coca-Cola Company. He most recently served as president and chief operating officer of CSX Corporation. Henry Meyer, non-executive chairman of the board of directors of United Continental Holdings, Inc. said, “Oscar’s track record demonstrates that he has the right blend of strategic vision and strong leadership to continue United’s upward trajectory. United is well positioned to continue executing on its strategic plan to further improve performance and the value and service it provides to its customers. I’m honored to have been elected non-executive chairman by my fellow directors. The board thanks Jeff for his service to both United Airlines and Continental Airlines.” “It is truly a privilege to serve as United’s CEO. United has an incredible opportunity for improving an experience that is essential to the vitality of global business and to the personal lives of millions of people, for innovation, and for earnings growth,” said Oscar Munoz, president and CEO of United. “In my years serving on the board, I have been impressed by the dedication and skill of my new coworkers. Together, we will make United the top-performing airline.” Prior to joining United Airlines, Munoz served as president and chief operating officer of CSX Corporation, a premier transportation company. Munoz also served as a director at CSX. During Munoz’s tenure, CSX transformed itself into an industry leader in customer focus, reliability and financial performance. CSX was named one of Institutional Investor’s Most Honored Companies for a decade of excellent financial performance, including increasing its operating income by nearly 600%. Prior to joining CSX, Munoz served in various senior financial and strategic capacities at some of the world’s most recognized consumer brands, including AT&T, The Coca-Cola Company and Pepsico. He has served on the board of directors for United Continental Holdings, Inc. since 2010 and served on the board of directors of Continental Airlines, Inc. since 2004. Munoz is active in several industry coalitions and philanthropic and educational organizations including the University of North Florida’s board of trustees and the PAFA advisory board of Vanderbilt University. Munoz graduated from the University of Southern California with a bachelor’s degree in business administration, and he received a master’s in business administration from Pepperdine University. Munoz has been named one of the “100 Most Influential Hispanics” by Hispanic Business magazine. The company also announced that its executive vice president of communications and government affairs and its senior vice president of corporate and government affairs have stepped down. The departures announced today are in connection with the company’s previously disclosed internal investigation related to the federal investigation associated with the Port Authority of New York and New Jersey. The investigations are ongoing and the company continues to cooperate with the government. The company’s internal investigation and the related circumstances do not raise any accounting or financial reporting concerns.