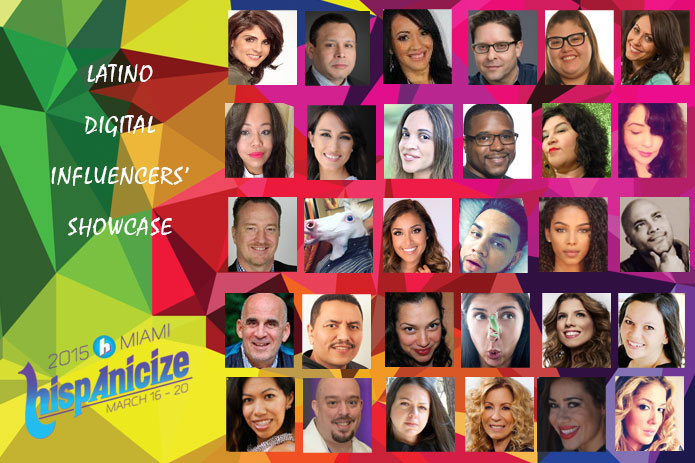 Curated by the Latina Mom Bloggers network, the reimagined digital influencers platform of Hispanicize 2015 is the largest and most comprehensive one ever assembled to empower multicultural vloggers, bloggers and other digital influencers.

“Our agenda, speakers and sponsors reflect a massive expansion that provides Latina digital influencers with exceptional professional development, networking opportunities with hundreds of multicultural-focused brands and agencies, VIP treatment, and entertainment that is unparalleled,” said Manny Ruiz, founder and creative director of the sixth annual Hispanicize 2015.

Co-CEO of Latina Mom Bloggers, Piera Jolly said, “Through the years we have built a track record of giving Latina influencers a financial and professional ROI for their investment in attending that is nearly impossible to match, and this year we’re offering even better opportunities.”

Key highlights of the 2015 Latina Digital Influencers Showcase include:

The Launch of the Tecla Awards: Created to recognize excellence in Latino blogging, micro-blogging and social media/digital marketing, this national awards program kicks off Hispanicize 2015 on March 16. The red carpet awards gala and concert is expected to bring top digital influencers, brands, agencies and celebrities.

An Array of Sessions with Top Latina YouTubers, Instagrammers and Viners: Among this year’s top Latino YouTube, Facebook, Instagram and Vine superstars that will share their tips and tricks for social media success are DulceCandy, LeJuan James, SunKissAlba, Jorge Narvaez and more! DulceCandy will play a very special role as she will be the first ever Latina digital influencer to receive the prestigious Latinovator Award.

Deep Dives into Producing Quality Videos, Instagram, Vine and Podcasting: As part of this year’s advanced level sessions, the Latina Digital Influencers Showcase will feature practical, how-to content on producing and monetizing YouTube videos, Instagram, Vine, photography, podcasting and more! An engaging Instagram and Vine Tour of Miami will feature a $1,000 Instagram and Vine contest courtesy of a major brand!

Increased Presence of Multicultural Brands and Agencies: Hispanicize 2015 is widely considered the most indispensible event for U.S. Hispanic brands and agencies in the U.S.-Hispanic market and one of the biggest perks of the event has always been its ability to bring hundreds of these marketers together with the digital influencers they want to work with. This year’s growing roster of brand sponsors and non-sponsors will easily surpass last year’s record setting numbers.

400 Free, Full VIP Access Badges for Digital Influencers: In an unprecedented move one major sponsor will shortly reveal their role in providing 400 free, full-access passes to digital influencers who have been consistently active for more than nine months. Digital influencers can sign up in advance for these passes here.

WordPress.com Latino Day: Hispanicize and Latina Mom Bloggers have partnered with WordPress.com and Kathy Cano-Murillo of Crafty Chica to curate a full day of the most practical and popular sessions produced for the WordPress.com conferences. In addition to presenting these sessions with their top trainers, WordPress.com will also offer digital influencers and other attendees four full days of one-on-one tech help at their Happiness Bar. Several sessions will also be hosted in Spanish.

Access to Hispanic Marketing, Entertainment, Journalist and Tech Entrepreneur sessions: One of the most popular aspects of the Hispanicize event is that Hispanicize lets everybody from multiple industries attend each other’s sessions, programs and event. This democratic form of super, multi-industry networking is a Hispanicize standard that greatly benefits digital influencers seeking their ROI for attending.

Business Building and Monetization Workshops include:

– 50 Shades of Green: The Many Ways to Monetize Your Blogs, Vlogs and Social Media Channels

– Protect Your Work! A Legal Primer on Copyright Law for Digital Content Creators

– An Introduction to Podcasting

Meet the Viral Influencers Sessions: This year we will feature several with top viral influencers. Among those sessions will be: