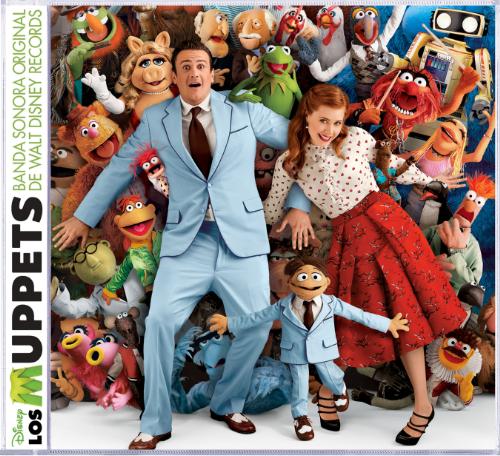 Kermit the Frog, Fozzie Bear, Miss Piggy and the whole Muppet gang are back and ready for their felt-frenzied close-up, as Walt Disney Records is set to release the Spanish language version of the soundtrack to Disney’s Los Muppets, the brand new big-screen adventure starring Jason Segel, Amy Adams and the beloved Muppets.  Featuring songs written by Bret McKenzie (“Flight of the Conchords”), updated versions of Muppet classics and familiar hits given the Muppet treatment, the Spanish language soundtrack arrives in stores and at online retailers December 6, 2011.

McKenzie, who created, co-wrote, executive produced and starred in the hit HBO television series “Flight of the Conchords,” is the music supervisor, as well as the writer/producer of four original songs, including “Life’s a Happy Song,” “Let’s Talk About Me,” “Man or Muppet” and “Me Party.”  McKenzie also produced “Pictures in My Head” and “Rainbow Connection.”

“Music was always an integral part of the ‘The Muppet Show’ and Muppet films,” McKenzie said. “It’s hard to think of the Muppets without thinking of songs like ‘Rainbow Connection’ or ‘Mah Na Mah Na.’ The Muppets don’t sound like anyone else and that’s what’s great about them. It was a huge honor to work on ‘The Muppets’ and I took the job very seriously, even when I was recording a man pretending to be a penguin.”

The Muppets turn in new renditions of “The Muppet Show Theme” (co-written by Jim Henson, the song opened and closed “The Muppet Show” for five seasons in the US and UK, from 1976-1981), the treasured Muppet classic and Academy Award-nominated “Rainbow Connection,” (penned by Oscar-winning composer Paul Williams and Kenneth Ascher) as well as the original 1969 version of “Mah Na Mah Na.”  The felt gloves come off in new Muppet interpretations of Cee Lo Green’s “Forget You” and Nirvana’s “Smells Like Teen Spirit.”

Also included are the original versions of Paul Simon’s 1972 hit “Me and Julio Down by the Schoolyard” and Starship’s 1985 chart-topper “We Built This City.” The album also features 15 dialogue interstitials from the film.

On vacation in Los Angeles, Walter, the world’s biggest Muppet fan, his brother Gary (Jason Segel) and Gary’s girlfriend Mary (Amy Adams) from Smalltown, USA, discover the nefarious plan of oilman Tex Richman (Chris Cooper) to raze the Muppet Theater and drill for the oil recently discovered beneath the Muppets’ former stomping grounds. To stage a telethon and raise the $10 million needed to save the theater, Walter, Mary and Gary help Kermit reunite the Muppets, who have all gone their separate ways: Fozzie now performs with a Reno casino tribute band called the Moopets, Miss Piggy is a plus-size fashion editor at Vogue Paris, Animal is in a Santa Barbara clinic for anger management, and Gonzo is a high-powered plumbing magnate. With a screenplay by Jason Segel & Nicholas Stoller, the film is directed by James Bobin. Featuring signature celebrity cameos, Disney’s “The Muppets” is in theaters now.

Disney’s Los Muppets Spanish language soundtrack will be available wherever music is sold on Dec. 6, 2011. For more information on Walt Disney Records’ releases, please visit Disney.com/music, become a fan at Facebook.com/disneymusic or follow us at Twitter.com/disneymusic.