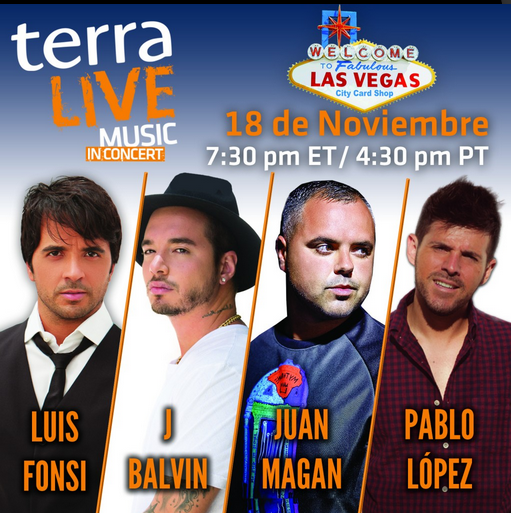 “Our growing partnership with Terra Live Music demonstrates Sprint’s ongoing commitment and support of Latin music and entertainment,” said Kymber Umana, Hispanic Market Manager for Sprint. “We are honored to more deeply connect our Hispanic consumers to their favorite artists with the biggest Terra Live Music concert event to date.”

The concert brings together some of the best performers in Latin music. Earning the title as the “Leader of the New Generation of Latin Music,” Luis Fonsi will perform his critically acclaimed live show for the “Terra Live Music” fans. Fonsi boasts an incredible 17-year-career as a musician, songwriter and producer, winning a Latin GRAMMY for “Song of the Year” for his hit single “Aquí Estoy Yo,” thirteen Premios Juventud Awards, five Latin Billboard Awards, eight Premio lo Nuestro Awards, among others.

Latin GRAMMY award nominated emcee/singer, J Balvin, who burst onto the music scene with his critically acclaimed debut album, La Familia, and has become one of the most promising new talents in urban music will join Luis Fonsi and the rest of celebrity line-up. The Colombian will entice fans with an urban pop experience with hits that include multi-platinum breakthrough single, “6AM” and current chart-topping single “Ay Vamos.”

Juan Magan, best known as the creator of the “electro Latino” movement, is one of the most successful Spanish artists of recent times; over 100 concerts around the world, 1 million in attendance, currently has the #1 song in downloads, streams and views with his new single – Si No te Quisiera. Juan Magan will showcase his unique style dance and Latin music including 2013’s most streamed and downloaded song in Spain “Mal de Amores.” On the other spectrum of the musical wheel, Pablo López brings the romantic sounds of his native Malaga. His debut album went gold in his Native Spain and has had a series of #1 tracks – including Vi and Mi Casa. Pablo López will enamor the audience with interpretations of his Latin Grammy nominated album “Once Historias y Un Piano.”

“We are honored to team up with Terra to bring this unprecedented concert experience to fans who attend in person and those around the world who will connect through their mobile devices, tablets and computers,” expressed Horacio Rodriguez, Senior Director of Digital Marketing for Universal Music Latin Entertainment US & Mexico. “The ‘Terra Live Music’ franchise has produced ground breaking performances for many Universal artists and we look forward to this new event becoming a landmark experience year after year.”

These four artists have revolutionized the Latin music genre with their unique sounds. Fusing together the rhythms of Latin pop, Reggaeton, EDM and Electro Latino into a sensational concert experience, Terra has found the most fitting way to celebrate its 15-year anniversary on the stage that started it all: “Terra Live Music.”

Don’t miss the incredible “Terra Live Music in Concert” event, presented by Sprint, in Las Vegas and enjoy every minute on Tuesday, November 18 at 7:30PM ET/4:30PM PT by visiting www.Terra.com.