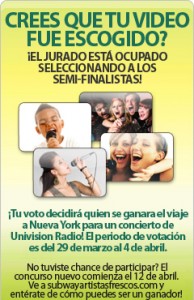 The partnership also includes the creation and promotion of a branded micro-site entitled “SUBWAY Artistas Frescos(TM)” (SUBWAY Fresh Face Artists(TM)), where listeners can enter to win prizes, including a grand prize trip for two to a Univision Radio Concert Series event over the course of the year and will allow participants to submit a creative video that incorporates the SUBWAY(R) jingle.

Each submission will be judged on uniqueness, creativity, originality and use of the jingle. The top-ten videos will be selected and posted on the site to allow visitors to vote for their favorite submission.

Getting started with Edge Animate