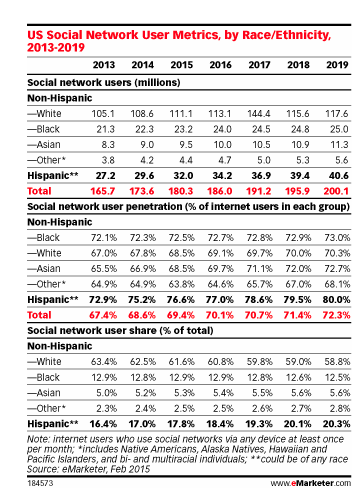 When one factors in the below-average internet penetration among Hispanics, however, this disparity mostly disappears when calculated as percentages of population, at 56.5% vs. 56.1%. One caveat: The above-average proportion of young children in the US Hispanic population tends to depress its overall social network user penetration. Ten years from now, many Hispanics currently too young for Facebook and other social sites will be using them and pushing those numbers upward.

Social networking has special resonance for US Hispanics of all ages as a way to keep in touch with family members in the US and elsewhere. A hint of this emerged in a study conducted between May and August 2014 by Ipsos MediaCT for Facebook: 48% of US Hispanics’ Facebook friends were family members, vs. 36% among US Facebook users in general.

Social networking also has distinctive appeal as an online activity US Hispanics can pursue in whatever language (or languages) they please. A May 2014 survey of bicultural US Hispanics by marketing consultancy Latinum Network found 33% identifying English as their language of choice when posting on social media, while 27% used Spanish and 40% used the two equally. But preference varied with the situation, as Latinum noted in its analysis of the findings: “Wanting to make sure their family will see it and read it? Spanish. Want to share something with classmates or co-workers? English.”