STUDY: English Proficiency on the Rise Among Latinos 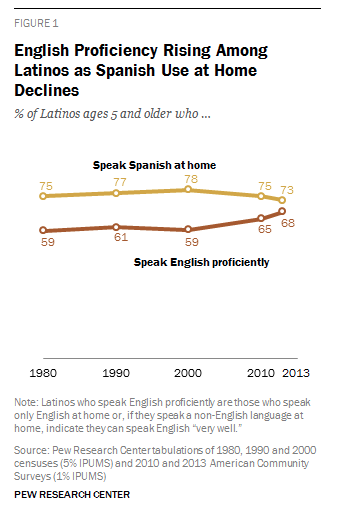 These shifts coincide with the rise of U.S.-born Hispanics as a share of the nation’s Hispanic population, and the slowdown in immigration to the U.S. from Latin America. In 2013, U.S.-born Hispanics outnumbered foreign-born Hispanics by nearly two-to-one—35 million to 19 million—and made up a growing share (65%) of the nation’s Hispanic population. They are also much younger, with a median age of 19 years compared with 40 among immigrant Hispanics (Stepler and Brown, 2015). At the same time, immigration from Latin America, primarily Mexico, has slowed (Passel, Cohn and Gonzalez-Barrera, 2012), leading to fewer Spanish-speaking new immigrant arrivals and a more settled U.S. Hispanic immigrant population.

As a result, since 2000, U.S. Hispanic population growth has been driven primarily by U.S. births rather than the arrival of new immigrants (Krogstad and Lopez, 2014).