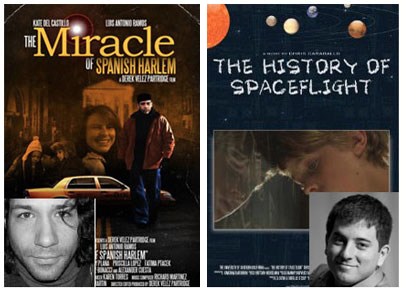 An encore screening of the best of show feature length and short films of Hispanicize 2012 will be held May 31st in Miami as part of a special event that will also include a networking reception for South Florida filmmakers.

“The Miracle of Spanish Harlem”, a feature length film directed by Derek Velez Partridge and “The History of Spaceflight”, a short directed by Chris Caraballo will be exhibited back to back from 6:30 to 8:30 p.m. at Miami’s historic Tower Theater, 1508 Southwest 8th Street in Little Havana.

The film screenings will be followed by a special filmmakers and social media networking event in the second floor of the theater that will include a discussion about what’s ahead for filmmakers at Hispanicize 2013 (April 2013).

Sponsored by one of Miami’s premier restaurants Truluck, the Starz network show “Magic City”, BlackBerry and Freedom Concierge Services, the screening and networking event is free for filmmakers, actors, bloggers and media who RSVP at http://hispz12film.eventbrite.com/ . RSVPs are being accepted on a first come first serve basis.

“This special screening is well deserved by Derek and Chris, two up and coming directors who we proudly support because we need more talented Latinos in Hollywood,” said Manny Ruiz, founder and creative director of the annual Hispanicize event. “We are proud of these filmmakers and are grateful to our sponsors for helping make this event possible.”

About The Miracle of Spanish Harlem

“The Miracle of Spanish Harlem” is an emotional drama about redemption and a man who tries to make his own miracle, only to find a real one. Directed by Partridge, the screenplay was written by Carlos Bermudez. The cast includes Kate De Castillo, Luis Antonio Ramos and Tony Plana, among others.

About The History of Spaceflight

Directed and produced by Chris Caraballo, “The History of Spaceflight” tells the story of several children who are left alone for an afternoon and their scheme to sneak up into the attic to uncover their Christmas presents early. It’s one small step for them, but one giant leap for children everywhere. The cast includes Christian Kramme, Cole Jensen, Rachel & Amanda Pace.

The National Latino Film Showcase of Hispanicize 2012 was a co-production with Latin Heat Media and Getty Images Hispanic and was sponsored by BlackBerry and Diageo. Other sponsors include Cricket Wireless, Starz, Regal Cinemas, Bacardi USA, HATUEY Cuban-Style Ale and uSamp.