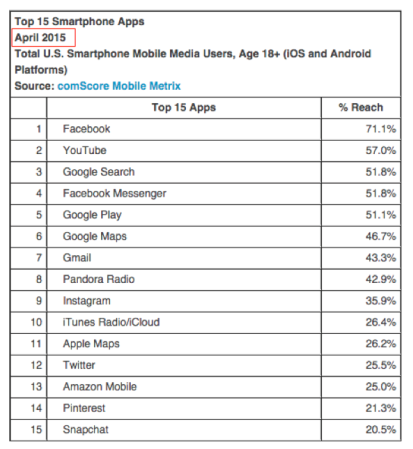 comScore released its latest monthly smartphone data for the US. Over the past quarter the iPhone is the only major device that appears to have gained marketshare. Month over month there hasn’t been much change. It’s more interesting to look at data from the past four years and see how the numbers have shifted. Below is a chart I created with comScore’s data from April 2011, 2013 and this most recent figures above. The margin between Android’s share and the iPhone has remained fairly constant. Although since 2013, when it was at its highest, the gap has narrowed. Microsoft initially lost share in the transition to Windows Phone. Since that time the company’s mobile marketshare has been flat at roughly 3 percent (other sources show it somewhat larger). The chart below

makes very clear that Android and iPhone penetration growth has come at BlackBerry’s expense, as users adopted one or the other of the two platforms. The other component of the monthly comScore report is the top 15 apps. The data reported below show penetration not engagement or usage frequency. Nonetheless this part of the report is more interesting than the OS numbers, which have been relatively stable over the past couple of years. Of particular note, Snapchat has entered the top 15 for the first time, apparently displacing Google+. Comparing April 2014 with the recent report, we can see up or down movement for several

apps. Most significantly, however, the Yahoo apps present a year ago (Stocks, Weather) are entirely gone from the top 15 and so is The Weather Channel app. Source: Marketing Land