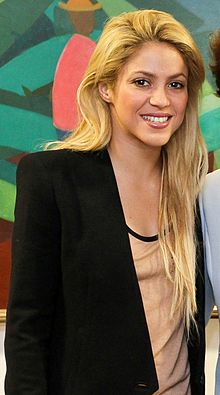 The 12th Annual Tribute Gala Will Be Held on Nov. 9 at the Mandalay Bay Convention Center in Las Vegas as Part of This Year’s Latin GRAMMY Week Celebration Three-time current Latin GRAMMY nominee, seven-time Latin GRAMMY winner, two-time GRAMMY winner, and international superstar and philanthropist Shakira will be the 2011 Latin Recording Academy Person of the Year, it was announced today by The Latin Recording Academy (www.latingrammy.com). Shakira, who is currently nominated for three Latin GRAMMY Awards, including Album Of The Year, will be honored for her renowned artistic and philanthropic contributions at a tribute dinner and star-studded concert on Wednesday, Nov. 9, 2011, at the Mandalay Bay Convention Center in Las Vegas. Songs from Shakira’s still growing catalog will be performed by notable artists and friends of the honoree. A major portion of the net proceeds from the gala will benefit Shakira’s Pies Descalzos Foundation as well as The Latin Recording Academy’s Latin GRAMMY in the Schools educational efforts. The celebration will precede the 12th Annual Latin GRAMMY Awards, which will be held at the Mandalay Bay Events Center in Las Vegas and will be broadcast live on the Univision Network on Thursday, Nov. 10, 2011, at 8 p.m. Eastern/7 p.m. Central. For breaking news and exclusive content, join The Latin Academy’s social networks as a Twitter follower at www.twitter.com/latingrammys, and a Facebook fan at www.facebook.com/latingrammys.

“It is truly an honor to be in the company of some of the greatest artists and legends of Latin Music,” said Shakira about this one-of-a-kind distinction.

Born in Colombia, Shakira showed early talent in school as a live performer, demonstrating her vocal ability already combining rock, Latin and Mediterranean influences with her own original twist on belly dancing. As a singer/songwriter, dancer, producer and musician, she emerged on the international music scene in the early ’90s. In 1996, Shakira released Pies Descalzos, featuring the hit singles “Estoy Aqui” and “Se Quiere…Se Mata” both topping the Billboard Latin Pop Airplay chart. Her next album, Donde Estan Los Ladrones? proved an even bigger success. Following was the release of her first live album in 2000, Shakira: MTV Unplugged, which spawned her first GRAMMY Award® for Best Latin Pop Album. At the inaugural Latin GRAMMY Awards ceremony in 2000, Shakira received her first two Latin GRAMMY Awards. Without skipping a beat, she released her first crossover album, Laundry Service, in 2001, which became the most successful album of her career to date. Her next, Fijacion Oral Vol. 1, in 2005, featured the hit single “La Tortura” with singer/songwriter and musician Alejandro Sanz. The album and single earned her four Latin GRAMMY Awards. Shortly thereafter, she released Oral Fixation Vol. 2, which included the worldwide hit “Hips Don’t Lie” in collaboration with musician/producer Wyclef Jean. In 2009, she released She Wolf and quickly following on the heels of that project she released Sale e Sol in 2010. In addition to her busy recording schedule, Shakira has taken the world by storm with many successful global concert tours.

Shakira’s numerous philanthropic efforts began at age 18 when she founded the Pies Descalzos Foundation, a charity providing special schools for underprivileged children throughout Colombia. She is  a UNICEF Goodwill Ambassador, chosen for her involvement in global issues and her deep commitment to helping children. As an advocate for universal education, she served as Honorary Chairperson for the Global Campaign for Education, generating awareness for the U.S. Education for All Act in 2007. She has performed at many benefit concerts, and at the 2007 Clinton Global Initiative, Shakira received a commitment of $40 million from the Spanish government to help the victims of natural disasters. An additional $5 million was to be donated to four Latin American countries, to be spent on education and health. In its December 2008/January 2009 issue, People En Espanol announced Shakira as the “Humanitarian of the Year” as part of its Las Estrellas del Ano (Stars of the Year) awards. On her 32nd birthday, Shakira opened a new $6 million school in her hometown of Barranquilla, Colombia, which she sponsored along with her Pies Descalzos Foundation.

Shakira will have the distinction of becoming the youngest artist to receive the Latin Recording Academy Person of the Year honoree. She joins a list of artists that includes Placido Domingo, Carlos Santana Gloria Estefan, Gilberto Gil, Julio Iglesias, and Ricky Martin, among others.