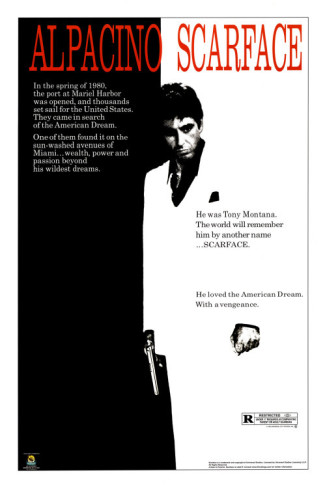 Three decades after it was politically spooked from being filmed in Miami – the city that serves as its backdrop – “Scarface” is returning to the Magic City in an over-the-top style event worthy of Tony Montana. On Friday, April 13 Hispanicize 2012 and Being Latino will team up to bring an unprecedented screening of “Scarface” presented by the legendary HATUEY Cuban-Style Ale to an ocean-side mansion benefit for ArtesMiami, Inc., the South Florida non-profit organization dedicated to developing South Florida as a cultural center with a special focus on Hispanic culture.  The iconic Miami Beach mansion, Villa Vecchia, is set to host the unique benefit (see the mansion at http://bit.ly/AvMM4u).  A parody promotional video produced by Digibunch is available at http://www.youtube.com/watch?v=cCXAkEvFL5U. The screening will also serve as the closing night event of Hispanicize 2012, the annual Latino trends event for social media, marketing, media and entertainment that’s being held April 10-13. As part of the event “Scarface” stars Steven Bauer (“Manolo”), Pepe Serna (“Angel”) and Angel Salazar (“Chi Chi”) will make a special appearance to talk about the classic film that ironically could not be filmed in Miami in the early 80s due to local political tensions at the time. “A gorgeous mansion, Steven Bauer, Pepe Serna, Angel Salazar, awesome Cuban food and everything wrapped around a good cause – this is the only way to properly pay tribute to Scarface,” said Hispanicize 2012 Event Organizer and Creative Director Manny Ruiz.

Admission to the “Scarface” event will be restricted to Hispanicize 2012 sponsors, VIPs, filmmakers, media, Latino bloggers and 25 lucky attendees of the four-day event.  The benefit is also sponsored by Cricket Wireless, the pioneer and leader in delivering innovative value-rich prepaid wireless services with no long-term contracts serving more than 5.9 million customers. Cricket will be providing the soundtrack to the evening via its award-winning Muve Music product, the first music service designed for a wireless phone that now has more than 500,000 customers.

The “Scarface” cult film event is part of the National Latino Film Showcase that Hispanicize 2012 introduced this year with presenting film showcase sponsor BlackBerry and in partnership with Latin Heat Media and Getty Images Hispanic.  Among this year’s film showcase highlights are the screenings of six feature length films, one of which will win a $10,000 grand prize and several dozen short films, one of which will earn a $5,000 grand prize.