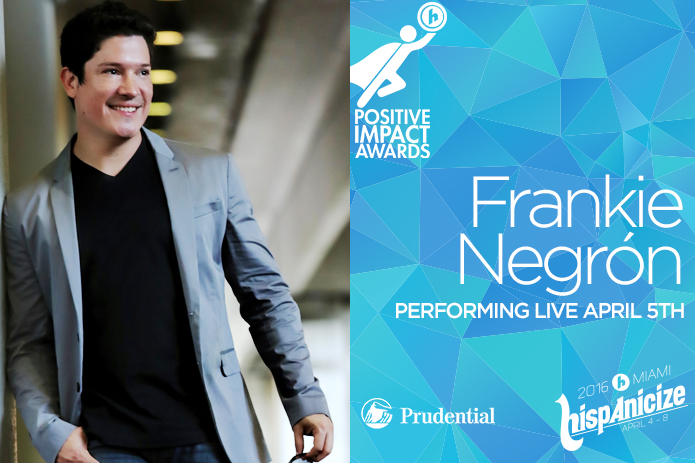 Organizers of the Hispanicize 2016 event today announced that Latin music superstar, Frankie Negrón will headline the third annual Positive Impact Awards, a national program presented by Prudential Financial that recognizes outstanding individuals who contribute selflessly to the advancement of their communities and of the nation.

Born and raised in Newark, New Jersey and of Puerto Rican descent, Negrón has tirelessly created award-winning music that has inspired audiences across the nation to dance and sing along to his tropical hits. Since 1997, Frankie has dedicated himself to the creative process, but has also been committed to giving back to his community through philanthropic efforts with organizations such as the American Diabetes Association, the American Red Cross, and Colombianitos, an international relief organization.

“Frankie Negrón has such

a strong trajectory that has inspired so many with not only his voice, but also with his heart. We cannot wait to dance along to his performance at the Positive Impact Awards and applaud a performer that truly understands the impact that just one individual can have on many lives,” said Katherine Johnson Gunn, Hispanicize Event’s executive music director.

“Giving back is vital to me. I am blessed to have career where I share my voice, but that voice can extend beyond my music. I get to be a voice for my community,” said Frankie Negrón.

Also performing during the gala will be American Idol 10th season finalist and singer/songwriter, Karen Rodriguez. She has performed solo at the Latin American Music Awards and along with renowned artist Prince Royce at the Latin Grammy Music Awards. Karen’s Spanglish cover of Adele’s “Hello” has over 10,500,000 YouTube views, reached #5 on US iTunes Latino chart, #7 Billboard Latin charts, and became the #1 streamed Viral song on Spotify in Latin America.