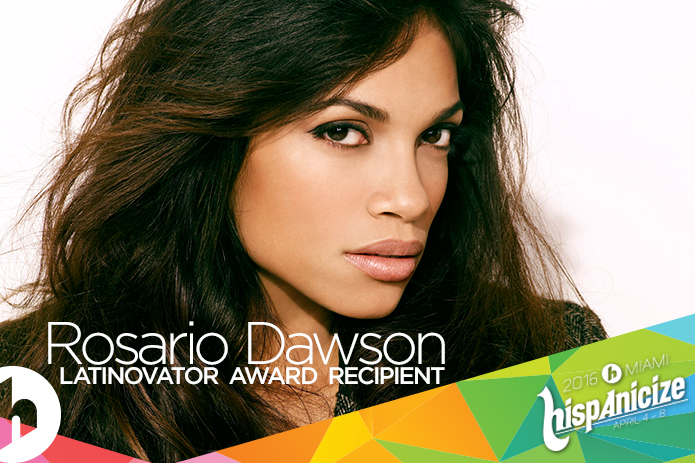 As an activist, Dawson is involved with several philanthropic organizations like the Voto Latino, Lower East Side Girls, Global Cool, the ONE Campaign, Operation USA, Oxfam, Amnesty International, Parents, Families and Friends of Lesbians and Gays, the International Rescue Committee, and StayClose.org. Born in New York City, Dawson is of Puerto Rican and Afro-Cuban descent.

“Rosario has used her versatile talents and celebrity to make a difference in a number of communities, attaching her name and influence to causes close to her heart is something we admire immensely. Her work with Voto Latino speaks to the core of what Hispanicize is all about,” said Manny Ruiz, Founder and Creative Director of Hispanicize.

Established in 2012, the Latinovator Awards recognize Latino celebrities, business professionals and other high achievers who have become crossover successes or whose stories of achievements are remarkable or inspirational.

This year, Rosario joins a prestigious roster of Latinovator Award recipients that includes Lele Pons, Ozzie Areu and Lizzie Velasquez. Each of the innovators will be presented individually with their awards at a special general session and discuss their inspirations, challenges, business habits and road to success.

The final schedule can be accessed at http://hispanicizeevent.com/schedule/or via the smartphone apps of iTunes, Android. To purchase a pass to attend the event, REGISTER HERE. To reserve a hotel room visit http://bit.ly/20wa0iM. See the official preview video of Hispanicize 2016 here: https://www.youtube.com/watch?v=Ys3_h5m8V6s)

In the spirit of its theme #PowerInUnity, this year’s event is being produced in collaboration with Geoscape, the National Association of Hispanic Journalists, the Latino Startup Alliance and Black Tech Week.

Sponsorship information are still available by contacting sponsorship@hispanicizeevent.com or calling 203.364.4779.