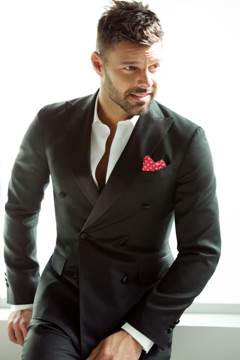 Ricky Martin, winner of multiple GRAMMY and LATIN GRAMMY awards, among others, is undoubtedly the most influential Latin music artist worldwide. He began his career at age twelve with one of the most successful groups in the Latin music scene and since then, his strong discipline, passion for music and undeniable charisma have made of his musical trajectory one of the most admired of a generation. Recognized as “an international icon and global ambassador to Latin music” by Billboard and honored by the Latin Recording Academy as “Person of the Year,” Ricky has sold over 85 million albums worldwide and has an impressive 95 platinum-certified records.

Ricky Martin’s highly-anticipated tenth studio album, A Quien Quiera Escuchar, was released on February 10th, debuting at No. 1 on US and Puerto Rico album charts. Available in all distribution formats and in two versions – original and deluxe – A Quien Quiera Escuchar is perhaps the most personal and intimate recording that the singer, philanthropist, author, actor and entrepreneur has released. The first two singles, “Adiós” y “Disparo Al Corazón,” have reached the top of national and international charts.

“I am very excited to be a part of this innovative program, together with Simon Cowell,” said Ricky Martin. “Our community needs musical projects in order to cultivate its talents; which is why I feel it’s the perfect moment for a show like ‘La Banda.’ There is so much talent to be discovered and I’m sure we’ll find the next musical phenomenon with the help of not only the judges but also the fans.”

“We are on a search for a world class band and we needed a world class judge and that’s why I’m thrilled to announce Ricky Martin as our first judge on La Banda,” said Simon Cowell. “I know Ricky and he is as excited and passionate as me about the show and I know he’s going to do an amazing job.”

With a new take on the singing competition show format, “La Banda” will search the U.S. and Latin America to put together the ultimate Latino boyband. Representing all Hispanic cultures, contestants will compete for their place in “La Banda” and for a coveted recording contract with Sony Music Latin, label home to the most prolific Latin music artists, along with executive producer Simon Cowell’s SYCO Music, the recording label for the world’s biggest selling boyband, One Direction.

“We are thrilled to have a world-renowned, award-winning and platinum-selling artist join our team,” said Alberto Ciurana, president, Programming and Content, Univision Communications, Inc. “Ricky’s vast talents as a singer, actor and producer will greatly enhance our phenomenal production already underway.”

To submit information, interested participants can enter LaBandaoficial.com and upload pictures, videos or music files. By registering online, selected contestants will receive a “golden ticket” which will allow them to participate in a private audition with the production team. The online casting will be followed by casting events across the United States and Puerto Rico in the spring of 2015. The talent search is open to boys 14 and older residing in the United States and Puerto Rico. The winning band will be managed by Ricky Martin.

Audition cities and dates are as follows:

THE WESTIN OAKS HOUSTON AT THE GALLERIA