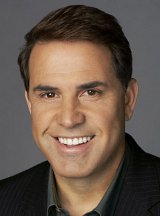 Gravity Summit is pleased to announce that Emmy Award-winning journalist, correspondent and television news anchor Rick Sanchez has been added as a keynote speaker at the upcoming Gravity Summit FutureM event at the Harvard Faculty Club on September 12, 2011.

Sanchez has been a leader in bringing social media to television news.  At CNN, he became one of the first national news anchors to use Twitter and later incorporated Facebook into his broadcasts as well.  Sanchez has long been a proponent of using social media to facilitate what he calls a “national conversation” between viewers and news reporters, creating interactive newscasts where peoples’ opinions are heard. He is also one of the few news personalities who follows many of his own Twitter followers and engages in discussions with them both on and off the air about news, sports and their lives.

At Gravity Summit FutureM, Sanchez will offer attendees a glimpse into his personal experiences from the front lines of the social media “revolution,” how it has changed the news industry, the lessons he’s learned that can be applied to business, and what he sees as next on the horizon.  Sanchez’s keynote address, along with the entire Gravity Summit, will be streamed lived via BrightTALK, a webinar and video platform provider for business professionals and their communities.

“Rick was an early adopter of Twitter and other social media tools and seemed to intuitively understand the importance of blending the social stream with news,” said Beverly Macy, CEO of Gravity Summit.  “We are honored he will be able to share his perspective with our business audience at our upcoming event in Boston.”

“I am excited to be a part of Gravity Summit’s FutureM event,” said Sanchez. “I look forward to sharing my perspective on the power of social media and how businesses can use it effectively. The tools we have at our disposal are increasing and evolving, and the ability we now have to engage with people directly—whether they’re viewers or customers—is both unprecedented and extraordinary.”

The upcoming Gravity Summit at the Harvard Faculty Club on Monday, September 12th officially kicks off the five-day long FutureM week held throughout Greater Boston. FutureM is the brainchild of the Massachusetts Innovation & Technology Exchange (MITX), the nation’s largest nonprofit trade association for the digital marketing, media and technology industry.

For more information and to register for Gravity Summit FutureM, visit www.GravitySummit.com.