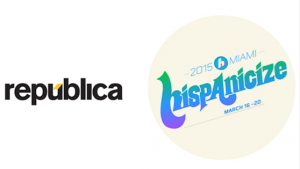 Hispanicize, the largest annual event for Latino trendsetters and newsmakers in journalism, blogging, marketing, entertainment and tech entrepreneurship, has selected República, one of America’s leading independent cross-cultural advertising, digital and communications agencies, as its agency of record. Manny Ruiz, chairman and founder of Hispanicize, made the announcement at the Miami-edition of “Hispanicize HX,” the kick-off event of Hispanicize 2015, which was held at the Viceroy Miami on September 3rd. Hispanicize 2015 will take place March 16-20 in Miami, Florida.

“As a cutting-edge agency, República has raised the bar with their creative, and we are eager to showcase the exciting work they have yet to unveil”

“I am confident that República’s groundbreaking work for Hispanicize 2015 will become a case study not only on how to develop world-class creative for a major event, but also on how to rebrand one of the most important gatherings in Hispanic America,” said Ruiz. “As a cutting-edge agency, República has raised the bar with their creative, and we are eager to showcase the exciting work they have yet to unveil.”

Since its founding in 2006, República, one of the fastest-growing independent agencies in the country, has been advising global, national and regional brands on how best to reach broader U.S. consumer segments cross-culturally.

“We are excited to have been selected by Hispanicize to rebrand what has become the top Latino event in social, blogging and journalism,” said Luis Casamayor, president and chief creative officer of República. “We look forward to doing what we do best, great creative that will transform the Hispanicize brand.”

A revamped website República has developed for Hispanicize can be viewed at http://www.hispanicizeevent.com/