REPORT: Hispanic young adults not as ‘disconnected’ from school, jobs as previous years 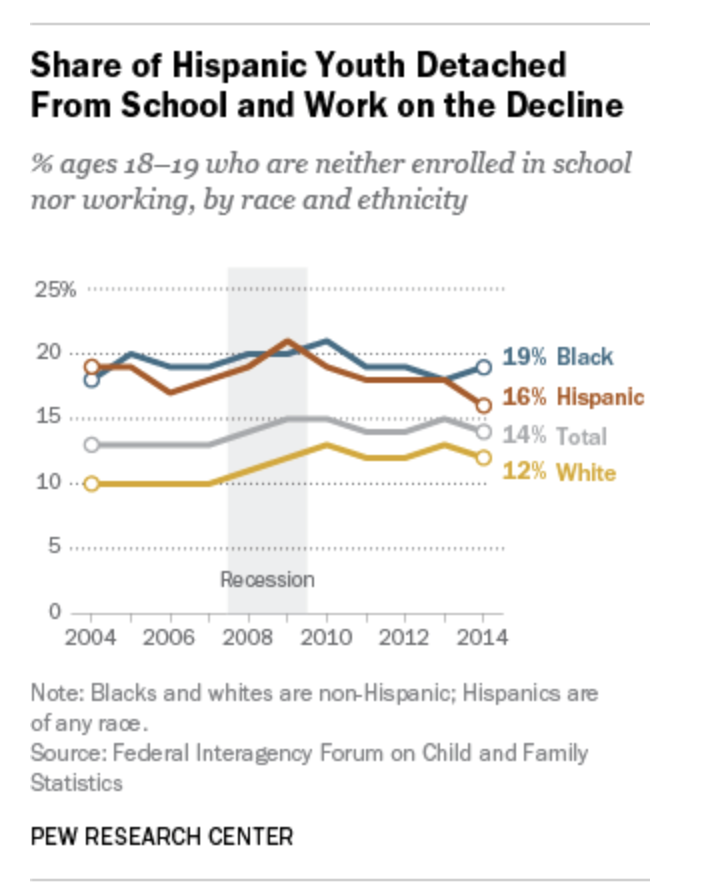 According to a new report by Pew Research Center, near the end of the Great Recession, about one-in-five Hispanics ages 18 and 19 were “disconnected youth” – neither working nor going to school. But, helped by the economic recovery, the share of these young Hispanic adults not working or enrolled in school dropped from 21% in 2009 to a historic low of 16% by 2014, according to a Pew Research Center analysis of federal government data. Share of Hispanic Youth Detached From School and Work on the DeclineOnly among Hispanics has the share of detached youth dropped below recession-era levels. By comparison, 19% of blacks of the same age were neither working nor in school in 2014, a level that has not changed much over the past decade, even during the recession. Among whites of this age, the share of detached young adults (12%) remained above pre-recession levels. One reason for this decline is that the unemployment rate for Hispanic youth has dropped more quickly than for young whites and blacks in recent years. From 2010 to 2014, the unemployment rate dropped from 32% to 19% among Hispanics ages 16 to 19, a steeper decline than among whites. Another reason for the decline is that more Hispanics than ever are enrolled in school. Among Hispanics, the high school dropout rate is at a record low, while at the same time college enrollment gains have outpaced other groups. Work and school provide key pathways to adulthood for young people. Research has shown that those who are detached from work or school may lack the knowledge and skills that lead to steady employment. Overall, 14% of adults in the U.S. ages 18 and 19 are neither working nor in school, according to data from the Federal Interagency Forum on Child and Family Statistics. This share has held steady over the past decade.

(Some young people are not included in this analysis: those in the military and prison. The data source, the Current Population Survey, excludes people in institutions like those.)