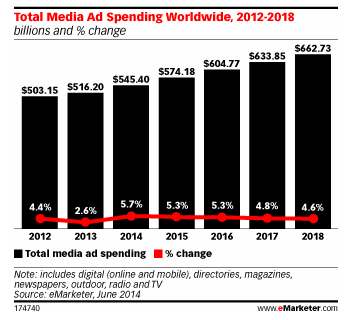 Advertisers worldwide will spend $545.40 billion on paid media in 2014, according to new figures from eMarketer. Total media ad spending will increase 5.7%, eMarketer projects, more than doubling its growth rate of 2.6% from a year ago.

Several factors will drive this year’s growth in total media ad spending—not only the worldwide advertising frenzies attached to the FIFA World Cup and, to a lesser extent, the Winter Olympics, but also the steady increases in online and mobile advertising as consumers globally shift their attention to digital devices.

On a country-by-country basis, the US is by far the leader in total media ad spending. eMarketer estimates that the US will eclipse $180 billion in advertising spending this year, or nearly one-third of the worldwide total. This spending is also the highest in the world per capita; US advertisers will spend nearly $565 on paid media, on average, to reach each consumer in the country in 2014.

By comparison, advertisers in China will spend only $37.01 per person, though the country’s large population adds up to the second-biggest ad spending total in the world. Norway is the second-leading country in terms of ad spending per person, at $538.71. Australia comes next in line at around $504 per person and is the only other country where advertisers will spend more than $400 this year to reach the average consumer.

On a long-term basis, digital channels will continue to drive advertising growth across the globe. eMarketer estimates that digital ad spending will increase 16.7% this year, totaling $140.15 billion and surpassing 25% of all media ad spending for the first time.

Raul Magdaleno Named 2010 Lider of the Year by MillerCoors