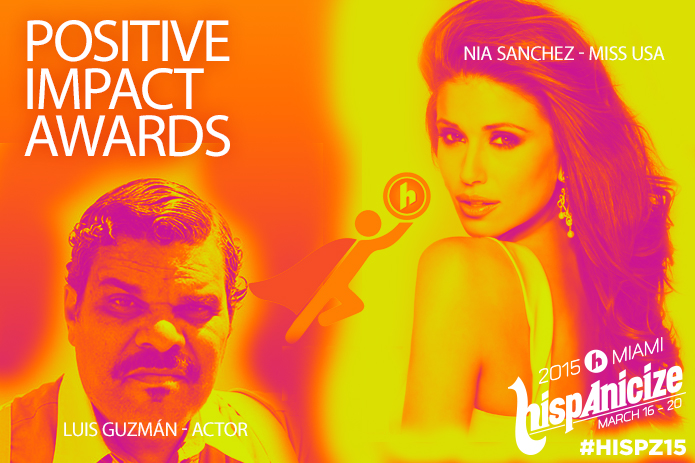 Reigning Miss USA Nia Sanchez and actor Luis Guzman will serve as masters of ceremony for the Positive Impact Awards sponsored by 3M, during Hispanicize 2015.

Now in its sixth year, Hispanicize 2015 will take place in Miami at the InterContinental Miami Hotel from March 16-20, 2015.

Nia and Luis will lead the March 19 red carpet dinner gala recognizing this year’s Positive Impact Award winners and their five projects that are being honored by Hispanicize and 3M for outstanding and selfless work with the Latino community in the United States. As a tribute to the winners of the prestigious award (see the full list of winners here), Latin GRAMMY-winning artist Luis Fonsi will perform to celebrate their achievements.

“Nia and Luis are the perfect duo to emcee this program because they themselves are examples of doing good for your community,” said Hispanicize Event founder and creative director Manny Ruiz. “Together they will highlight the stories of these honorees who demonstrate that individuals can be committed, positive influences in their communities across the country.”

Crowned in June 2014, the reigning Miss USA became the first contestant from Nevada to win the title and in January 2015, she placed as first runner up in the Miss Universe pageant. Nia, who is of Mexican and German descent, holds a fourth degree black belt in Taekwondo, and as such has used her platform as Miss USA to teach the mental and physical health benefits of the sport and to empower women to learn self-defense in order to prevent and avoid harmful situations.

Luis Guzman, born in Puerto Rico, is an award-winning character actor who since the 1980s has appeared in countless films and television productions including “Carlito’s Way,” “Traffic,” “The Count of Monte Cristo,” “Maldeamores,” “Journey to the Mysterious Island”, “Magnolia,” and many more. Luis is a passionate supporter of Latinos who has also served as a youth counselor. It was during his time as a social worker that he began performing in street theatre.

The Positive Impact Awards will take place on March 19, 2015 at the Intercontinental Hotel Miami at 7 p.m.