The Public Relations Society of America (PRSA) honored its Dallas, Orange County and Miami Chapters with the PRSA 2009 Chapter Diversity Award last week at the PRSA 2009 International Conference and this week PRSA provided details about each of the winning chapters and what they did to merit the award.

The Chapter Diversity Award, sponsored by the PRSA Diversity Committee, is given to PRSA Chapters that embody and demonstrate key values in diversity, and have:

* Initiated and maintained a successful diversity program in 2008.
* Recruited or mentored members with interests and expertise in diversity.
* Demonstrated a significant contribution toward diversity.
* Showcased diversity as one of the top three strategic goals for the Chapter.

The first recipient is the Dallas Chapter.  Accepting the award was Immediate Past Chair Suzie Robinson. The PRSA Dallas Chapter has never actively pursued a regular diversity program; instead, only one luncheon per year was dedicated to the theme of diversity – until now.   They were honored for their own outstanding efforts in advancing diversity through the “Drinks + Diversity” program.

The Dallas Chapter of the Public Relations Society of America set out to create a strategic diversity program that addressed the changing needs of an increasingly diverse business community and to raise awareness that diversity means much more than ethnicity or race. The chapter launched a signature networking event, “Drinks + Diversity.” The casual, yet informational, networking event offers the chapter the opportunity to learn about the newest in diversity initiatives from leading experts with first-hand experience in the diversity realm, while also giving attendees the opportunity to meet industry peers and learn about the different fields in the public relations industry. The kick-off event focused on “Connecting with the Latino Consumer,” and the second program informed attendees about the trends and tactics of diversity in communications – relating to the Gay Lesbian Bisexual and Transgender (GLBT) community.

The Orange County Chapter of the Public Relations Society of America has served as a resource for increasingly diverse Southern California businesses since 2004, raising awareness of diversity and inclusiveness in the PR profession and the Southern California community. The group has successfully held annual diversity leadership conferences, established and developed partnerships with local PRSSA chapters and opened a dialog with the business, academic and media communities in Orange County, emphasizing the impact of diversity on the bottom line. [description of program].

Accepting the Award of Honor for the PRSA Miami Chapter County is Rosanna Fiske, APR, who is the 2010 PRSA National Chair –Elect and Georgina Gonzalez-Robiou, APR.

Rosanna was instrumental in implementing the Chapter Diversity Awards. In 1994, Rosanna established the Chapter Hispanic Marketing Section of PRSA Miami, which was one of the first in the nation, and also helped develop the Diversity Tool Kit.

And, Georgina has been part of the Hispanic Market Section Committee of PRSA Miami for many years and instrumental in supporting the chapter’s diversity initiatives.

The Miami Chapter is receiving the Award of Honor for their initiative, “Hispanic Media 3.0: Social, Bilingual and Ready to Mingle,” a professional development workshop.

The Hispanic Market Section committee of PRSA Miami saw the need and an opportunity to address the ever-changing role of public relations professionals and how the Internet and social media are playing a major role in communications strategies. The group created two initiatives designed to provide Hispanic marketers and communicators with an opportunity to advance their careers and profession – a networking wine tasting event and a professional development workshop. More than 80 attendees from various professions attended the workshop, establishing a link and relationships with various organizations supporting the advancement of diversity in the profession and the Miami chapter. The event raised more than $4,000 for the chapter through sponsorships and workshop fees and was one of the best attended PRSA Miami events of the year and raised the most money for the chapter.

Below are photos of some of the winner’s of this year’s Public Relations Society of America Chapter Diversity Awards.  The winning chapters were Dallas, Orange County and Miami. 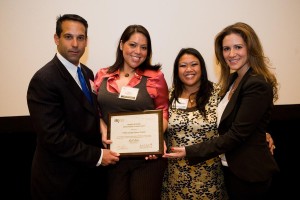 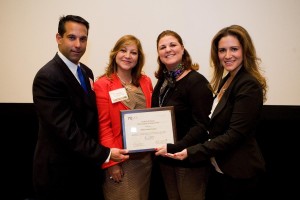