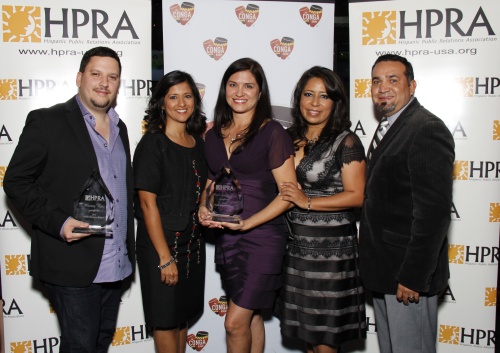 The Hispanic Public Relations Association (HPRA) celebrated its 27th Annual PRemio Awards and Scholarships Gala last week in Los Angeles with a gala at the Conga Room that honored the industry’s top public relations campaigns and industry professionals as well as awarded scholarships to students entering the communications field.

The association honored national campaigns showing excellence in Hispanic Public Relations with the coveted Campaign of the Year PRemio.

This year’s winners were:

This year’s Public Relations Professional honorees were Angela Sustaita-Ruiz and Manny Ruiz, co-founders of Hispanicize and Hispanic PR Blog, for their work in helping advance the Hispanic PR industry. Goya Foods was presented with the Corporation of the Year award for 75 years of commitment to the U.S. Hispanic market. Other honorees included: Young PR Professional Denisse Montalvan of Ketchum and Journalist Hector Tobar, columnist with the Los Angeles Times.

In addition to a scholarship, Varnes received the Esther Renteria Community Service Award for her community service involvement. This special recognition is given in memory of industry leader and community activist Esther Renteria, co-founder of the National Hispanic Media Coalition and a former HPRA president.

The evening was hosted by KNBC anchor Mekahlo Medina.

The Paradox of Being (Named) Latino