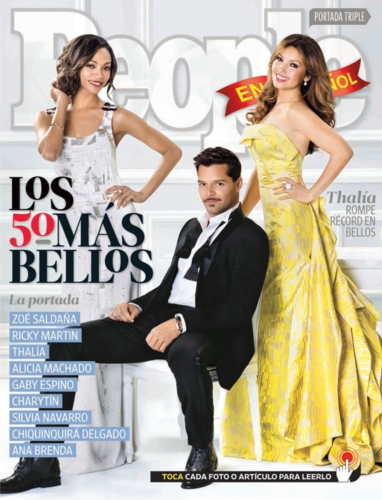 PEOPLE en Espanol’s “50 Most Beautiful” issue highlights some of today’s most popular names in Hispanic entertainment.  The cover features eight leading ladies including Avatar and Star Trek’s Zoe Saldana, along with one very lucky guy, Evita star Ricky Martin.  The “Mas Bellos” cover women appear in dresses by Venezuelan designer Carolina Herrera, jewelry by Mayors and shoes by Mui Mui and Brian Atwood, among others. The magazine traveled to remote cities in Argentina, Mexico, Puerto Rico and Spain to capture the photos.

Kicking off the issue this year is a magazine all-time favorite, Cuban actor William Levy. The leading man graced the “Mas Bellos” cover last year and has appeared in the issue four times in a row since 2009. Dancing his way into the rest of America’s heart on ABC’s hit show Dancing with the Stars, Levy is enthusiastic to have the attention of his new followers but remains proud knowing that his Latin fans continue supporting him. “People become interested, they believe in your work,” he says.  “Little by little things are happening.”

Another beautiful Latina who never forgets her roots is seven-time honoree Sofia Vergara.  In a recent interview with the magazine, the actress talks about her road to success. “I never imagined that I would have done something like this with my limitation in [speaking] English,” says Vergara, referring to her work in the hit ABC series Modern Family. “I’ve been very lucky.” Mexican singer and actress Thalia, who is on this year’s cover, breaks the record for being on the “Mas Bellos” coveted list a total of nine times. Actresses Penelope Cruz, Naya Rivera and Salma Hayek also made this year’s list.  Among the men making an appearance in “Mas Bellos” are NY Giants’ Victor Cruz and Reggaeton star Daddy Yankee.

For exclusive behind-the-scenes footage of People en Espanol’s “50 Most Beautiful” 2012, visit www.PeopleEnEspanol.com.  Starting May 3, PeopleEnEspanol.com will launch an online special dedicated to this year’s “50 Most Beautiful” with photo galleries of behind-the-scenes moments. Additionally, there will be daily updates with exclusive photo galleries, and celebrity interviews.

The complete list of People en Espanol’s 50 Most Beautiful: