Pablo Buffagni reinvents recipe for creative on the grill 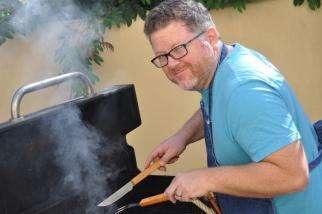 Pablo Buffagni, one of the best-known U.S. Hispanic creative directors, is returning in a new role. He’s combining his creative expertise with a talent for asado, the Argentine word for barbecue, in a new creative agency called BBQ.

“All the agencies have acronyms like BBDO, DDB, AKQA and I thought about asados, and [that led to] barbecues, and BBQ, which looks like a corporate logo,” he said. “Coming from Argentina, and doing asados almost every week, I thought it’s a nice metaphor for the U.S. Every culture has its own recipes, and their own approach. In the end, you have to fix something for everyone, and the side dishes may be different.”

The agency’s new website continues the comparison with “the universe of barbecue, a good analogy for brands serving the new America.”

Mr. Buffagni said he plans to hire a small core team, and be flexible about bringing others to the table as needed for accounts and projects, working directly with clients or with other multicultural or general market agencies. He sees new opportunities as marketers consolidate projects and move toward a more total market approach that leaves a lot of general market agencies scrambling for Hispanic expertise.

“I want to take advantage of the experience I have working with Toyota, T-Mobile, and Got Milk,” he said.

Mr. Buffagni is one of the most-awarded creatives in the U.S. Hispanic market, and is known for his innovative use of nontraditional advertising. He was the first U.S. Hispanic creative to win a Gold Lion in the film category at the Cannes Lions festival, and has swept local Hispanic awards in the U.S. His previous long-time shop Conill was Ad Age’s Multicultural Agency of the Year in 2007 and again in 2011.

Since leaving Grupo Gallegos earlier this year, he’s continued to work on a long-time pro bono project called Fundacion Forever, which helps poor children in El Salvador, and has handled a few projects for small clients like an Argentine Malbec wine vineyard.

To read the original story in Advertising Age, click here.