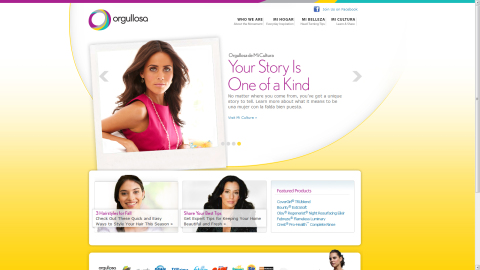 P&G announces the launch of “Orgullosa,” an initiative created to celebrate, empower, and fuel Latinas’ accomplishments and dreams. The initiative, which carries the name of the Spanish word for “proud”, has as its centerpiece Orgullosa.com, a virtual community through which Latinas can engage in a dialogue with one another that also provides them beauty, household, and lifestyle advice to simplify their lives.

The 2010 Census revealed that 50.5 million (or 16%) of the US population were of Hispanic origin, and P&G estimates that approximately 15 million Latinas share a dual heritage (Latina and U.S.). Orgullosa.com celebrates this biculturalism and will be launched during this Hispanic Heritage month empowering “Mujeres con la Falda Bien Puesta,” which literally translates to “a woman who has her skirt well placed.” The concept celebrates the femininity of Latinas, while acknowledging their steadfast spirit on the path to achieving personal and family success.

“We understand that Latinas living in the U.S. have much to be proud of — from their traditions, to their language to their cultural heritage and original style. They are go getters taking on multiple roles day-in and day-out,” explained Alexandra Vegas, Director Multicultural Business Development Organization North America. “We want to support Latinas in their personal journeys and empower them to feel confident about their appearance, style and home. This is why Orgullosa exists.”

Motivational speaker and bestselling author, Maria Marin will serve as the spokeswoman for the initiative: “I am proud to be a part of this initiative and continue to share my life’s work of motivating and empowering Latinas to succeed in all aspects of life professionally and personally,” Ms. Marin stated. “Today, Latinas are the new face of America, holding powerful positions in science, public service, the arts and entertainment while keeping our heritage strong and proving to the world how successful we are.”

One thought on “P&G Launches Orgullosa, an Inspiring Initiative That Fuels Latina Pride”