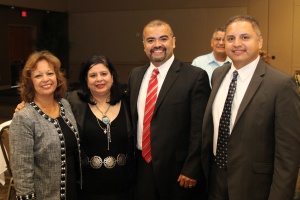 Castillo Kickbusch shared her message of purpose, hope and inspiration with guests who represented all corners of the state in Oregon. “In whatever you do in life”, Castillo Kickbusch says, “the most important thing it to have a mission and a passion for what you do.”

Hosted by IZO Public Relations & Marketing firm specializing in the Hispanic market, the Oregon Commission on Hispanic Affairs, and the Latino Business Alliance of the Willamette Valley, the breakfast begins a series of celebrations in Oregon recognizing the contributions of Hispanic Americans to the United States and to celebrate Hispanic heritage and culture.

“This year has exceeded our turnout and expectation,” said Anthony Veliz of IZO Public Relations & Marketing.