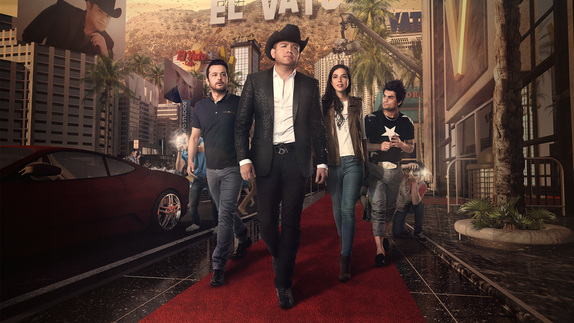 NBC UNIVERSO, a modern entertainment and sports cable channel for Latinos, announced today the premiere simulcast of “El Vato”, starring Regional Mexican star El Dasa to air on NBC UNIVERSO and TELEMUNDO this Sunday, April 17 at 10pm/9c after the debut of “La Voz Kids”. The first episode will premiere on both networks and then exclusively on NBC UNIVERSO as of Sunday, April 24 at 10pm/9c.  To view a sneak peek of “El Vato,” click here.
“El Vato” is NBC UNIVERSO’s first original scripted series created for the U.S. Hispanic market.  The 10 episode-long dramedy produced by Endemol Shine Latino and Boomdog, marks the acting debut for the talented and charismatic singer from Sonora, México who takes on a new challenge to expand his artistic career.
“As part of NBCUniversal Telemundo Enterprises, we are very excited that TELEMUNDO will offer its viewers a taste of our first scripted original series, El Vato,” said Bilai Joa Silar, Senior Vice President of Programming and Production, NBC UNIVERSO. “It’s a story about friendship and following the American dream with Hollywood as the backdrop that will resonate with viewers across both networks.”
The series follows an aspiring singer, El Vato, as he navigates life in Los Angeles after landing a once-in-a-lifetime record deal. He risks it all, leaving his life in Mexico for the bright lights of Hollywood and a shot at stardom. With temptations at every turn, and his friends in tow, does he have what it takes to make it?
The entourage that will accompany El Vato on his journey to stardom is: Cristina Rodlo (Mariana), Gustavo Egelhaaf (El Pollo), Ricardo Polanco (Brandon) whose great chemistry on and off screen translates into great TV. Supporting cast includes Itatí Cantoral (Wendy), Arcelia Ramírez (Tía Eli), Horacio Castelo (Lolo) and Mauricio Martínez (Marcos) who plays El Vato’s rival.
El Dasa was discovered in 2011 by mariachi legend, Vicente Fernández, when his band asked him to listen to his chauffeur sing. Fernández was so impressed by the young singer’s talent that he invited El Dasa to join him on stage and sing a duet at the Gibson Amphitheatre in Los Angeles. The audience gave the pair a standing ovation and Fernández asked the spectators to support the young artist’s career.  El Dasa has toured and shared the stage with major Regional Mexican bands including Banda el Recodo, La Arrolladora Banda el Limón, El Coyote y su banda, among many others.
Fans can start engaging on social media by using #ElVato, #EnTuRanch on Instagram and Twitter. To learn more about El Vato and its cast, visit: https://www.facebook.com/ElVatoTV.
NBC UNIVERSO is currently available to 40 million households across the U.S. The network is telecast in HD nationwide on DirecTV; Western U.S. markets served by Comcast Xfinity TV; throughout Bright House Networks’ cable television footprint; and select Cox Communications markets.
To find NBC UNIVERSO on your satellite, telco or cable TV channel lineup, go to Channel 410 on DIRECTV; Channel 838 on DISH Network; Channel 3009 or 3010 on AT&T U-verse; and visit www.nbcuniverso.com/encuentra for the NBC UNIVERSO channel number on your local cable TV listings.