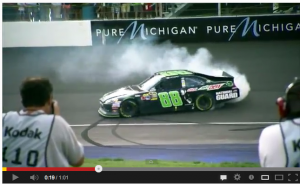 NASCAR will reveal a brand new creative vision – a campaign featuring more than two dozen drivers, with nine original spots in both English and Spanish. The drama-filled campaign will premiere during NASCAR’s crown-jewel event, the Daytona 500. The race will broadcast live on FOX and FOX Deportes on Feb. 24 beginning at 1 pm ET.

At the heart of the campaign are NASCAR drivers, who help bring to life the unpredictability and drama of NASCAR racing, both on and off the track. With an unprecedented incorporation of drivers, number of creative treatments featuring new digital engagement, radio and print, this is by far the most comprehensive and integrated campaign NASCAR has ever launched.

“The campaign was created to excite existing fans while engaging with new audiences, and is representative of where NASCAR is headed as a sport” said Kim Brink, NASCAR, vice president, marketing.  “In developing the spots, we wanted to celebrate the heart of what makes our sport unique, challenge existing perceptions, inspire the entire industry and do it all as authentically and confidently as possible.”

NASCAR’s new brand campaign was developed by Ogilvy & Mather’s New York office, inclusive of Ogilvy Rojo the Hispanic arm of the agency, which was awarded the business after an extensive pitch process in the summer of 2012.

“There’s no sport in the world with a more loyal and passionate fan base than NASCAR. Drivers are what make NASCAR racing so dramatic and unpredictable for everyone.” explained John Seifert, Chairman and CEO of Ogilvy & Mather North America. “To bring the NASCAR experience

to life, we helped create a brand platform that reflects the roots and character of what makes NASCAR unique, personified by remarkable athletes who will ensure that this sport remains the greatest show on earth.”

In addition to the brand campaign, NASCAR will continue to focus on seven planks strategically aimed at growing the sport: Gen Y, Youth, Multicultural, Digital/Social Media, Event Experience, Product Relevance and a focus on Driver Star Power. Already this year, the industry is experiencing many firsts across all of these platforms, including launch of new digital platform following the reacquisition of its digital rights, the unveiling of the new Gen-6 race cars that will reignite rivalries on the race track and in showrooms nationwide, and the first-ever live Spanish-language broadcast of NASCAR Sprint Cup Series races.