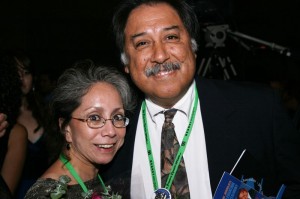 George Ramos and Rosa Morales during his 2007 Hall of Fame induction. Morales and Ramos co-directed the NAHJ Student Campus. - Image via NAHJ.org

George Ramos, a lifetime member of NAHJ and inductee into the NAHJ Hall of Fame, has passed away. He was 63. George was a mentor for the Student Campus at this year’s convention in Orlando, volunteer work he had done for many years. He was the consummate journalist, and was part of three teams whose work won Pulitzer Prizes for the Los Angeles Times. We grieve his loss and miss him. This tribute is written by NAHJ’s Vice President for Broadcast Manuel de la Rosa, one of George’s many protégés. – Michele Salcedo, President

Read the entire article at NAJH.org.