ALTHOUGH the word “upfront” is English rather than Spanish, the broadcast networks and cable channels that aim programming at Hispanic viewers are again increasing their presence during the annual television upfront week. 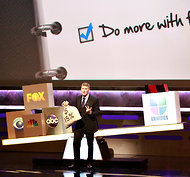 David Lawenda, of the Spanish network Univision, told advertisers on Tuesday, “Our niche has become your opportunity.”

There are nine presentations scheduled this week to brief advertisers on programming plans for the 2012-13 season (and yes, also woo them with shrimp and adult beverages). Last May, during the upfront week that preceded the 2011-12 season, there were five such presentations.

The reason for the higher profile this upfront week is the growing interest among advertisers in reaching Hispanic consumers in light of the results of the 2010 census, which found that the Hispanic population had surpassed the 50 million mark. More demand among advertisers to reach Spanish-speaking consumers — and those acculturated Hispanics who are bilingual or speak English — means more efforts by media companies to sell commercial time during shows those consumers watch.

A Year Of Social Media Marketing