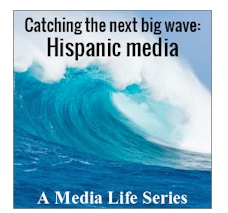 Over the coming months Media Life will publish a series of stories exploring Hispanic media and culture in America in 2015.

Where do Hispanics live? What media do they use? How does their media usage differ from other ethnic groups?

Think of it as the ultimate guide for media planners and buyers aiming to get up to speed on Hispanics and Hispanic media.

The series will appear in a new newsletter Media Life is launching called The Hispanic Media Report.

Media Life will also be increasing their coverage of Hispanic media for media planners and buyers.

Anyone who’s been in media some years remembers it well.

Call it the Great Hispanic Awakening, if you had to put a name to it.

It came about with the release of the 2000 federal census. The numbers of Hispanics had skyrocketed in the previous decade.

Americans were familiar with Cubans in Miami, Puerto Ricans in New York and other major Northern cities, and Mexican farm workers in California.

This new flood of Hispanics were entirely different. They were from all over Latin America, and as diverse in cultures as the countries they came from.

Yes, they settled in cities, as so many previous immigrants had, but huge numbers fanned out to small towns and cities across America.

They seemed to be everywhere and very visible.

These were the new faces of America.

Yet for all this change and growth, Hispanics remain something of a mystery to media planners and buyers. Misperceptions abound.

There are two reasons, and one is the the Hispanic population is in a sense a moving target, undergoing rapid change as the newer immigrants acclimate to American culture.

Second is the pace of change of media itself with the arrival of new technologies, which invariably change how people access media. Those changes can vary widely among demographics and ethnic groups.