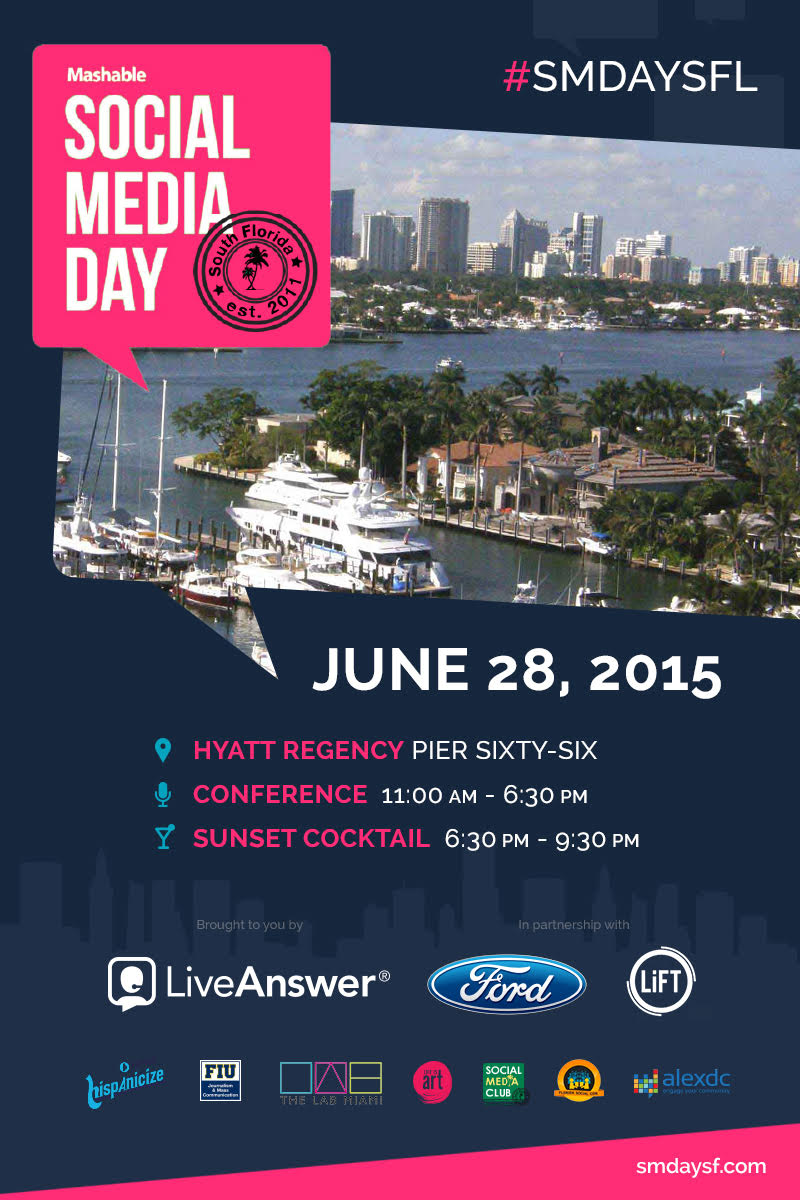 Readers of Hispanic PR Blog and Hispanicize attendees can receive a 20% discount by entering the code ( hispanicize) when registering .
Here is the link to register: http://www.eventbrite.ca/e/mashable-social-media-day-south-florida-2015-tickets-17143439489
The tickets for the full day plus Sunset Cocktail at the Pier Top 360 degree lounge at Pier 66 is $33. With the 20% discount code, it comes out to $26.40.

Formerly titled Social Media Day Miami, the event hosted one of the largest Social Media Days in the country in 2013, with over 900 attendees and 40 speakers. In addition to the day’s schedule of speakers and activities, the event drives online and offline conversation about the present and future of social media in South Florida and around the world.

This year’s keynote address will be provided by Adam Boalt, CEO of LiveAnswer. Based out of Pipeline Brickell, LiveAnswer is one of South Florida’s fastest growing start-ups and a shining example of the region’s prowess in digital innovation. While Boalt will be discussing the future of the digital media landscape, his company LiveAnswer also sees Social Media Day South Florida as a valuable opportunity for talent recruitment.

“As South Florida grows its identity as a home for experts in social and digital technology and trends, Social Media Day South Florida is a platform to share our individual expertise while building our collective knowledge base,” said Boalt. “With the region’s greatest digital minds all in one place at the same time, LiveAnswer intends to leverage the opportunity to recruit top-level talent to support the growth of our thriving, young business.”

LiveAnswer has partnered with Enrique Iglesias’ Atlantico Rum to develop a VIP experience centered on talent recruitment. Those who apply to become LiveAnswer’s newest “Marketing Rockstar” will gain two access passes to the Atlantico Rum VIP Suite during Social Media Day. Having worked together on social media for Atlantico Rum, Boalt and Iglesias share an enthusiasm for supporting the growth of South Florida’s digital and entrepreneurial community.

“Through Atlantico Rum and in partnership with LiveAnswer, I’m excited to not only participate in but also support the development of South Florida’s social media community,” said Iglesias.

The Social Media Day conference celebrates the art and craft of digital media through multiple tracks that feature talks benefiting the amateur as well as the advanced social media user. Attendees will socialize with the online community offline, while enjoying music, hors d’oeuvres and drinks at the happy hour mixer following the event.

Mashable launched Social Media Day in 2010 as a way to recognize the digital revolution unfolding in homes and workplaces everywhere. Each year, thousands of people organize hundreds of meet-ups across the globe. From Australia to the Philippines, all the way to Sri Lanka and Morocco, countries come together every June to participate in this global movement.

The event is being sponsored by LiveAnswer, Lift Digital Media and Ford en Español.

Those looking to join the online conversation can do so here:

Presentations and panel discussion topics can be viewed here: www.smdaysf.com/agenda.