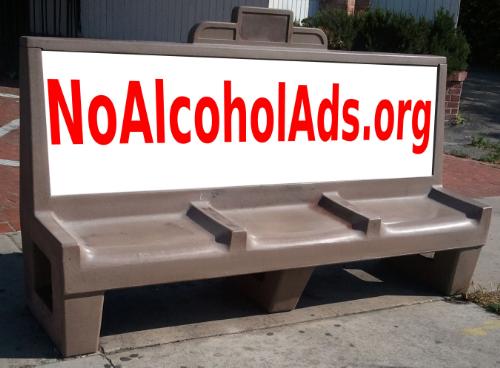 The Coalition to Ban Alcohol Ads from Public Property (NoAlcoholAds.org) rallied outside Los Angeles City Hall this morning in support of Councilman Richard Alarcón’s introduction of a motion at today’s City Council meeting to ban alcohol ads on all City-owned property. The Councilman is also supporting approval of a new 10-year bus bench contract that includes a provision to prohibit alcohol ads on bus benches.

Alarcón’s motion requests that the Los Angeles City Attorney, with the assistance of the L.A. Public Works Commission, Department of Building and Safety, Planning Department and General Services Department “prepare an ordinance within 60 days to prohibit alcohol advertising on city owned and controlled property modeled after similar ordinances in San Francisco and Philadelphia.”

The City Council postponed until Friday action on awarding Florida-based Martin Outdoor Media, LLC the exclusive right to build and/or maintain a minimum of 6,000 city-owned bus benches and sell advertising space on them. In the new contract, “labeled and/or branded alcohol” joins the list of items prohibited from advertising on bus benches along with tobacco, firearms, adult bookstores, adult theaters, adult escort services, and pornographic or obscene matters.

Individuals and groups throughout the city and state joined together as the Coalition to Ban Alcohol Ads from Public Property to campaign for alcohol ad bans and found a responsible corporate partner when Martin Outdoor Media was quick to support the concept of prohibiting alcohol ads on bus benches in their new proposed contract with Los Angeles.

A 2007 study by Alcohol Justice found that many cities in the U.S. already restrict alcohol ads from appearing on mass transit systems, and the city and county of San Francisco enacted an ordinance to prohibit alcohol ads from all public property in future contracts.