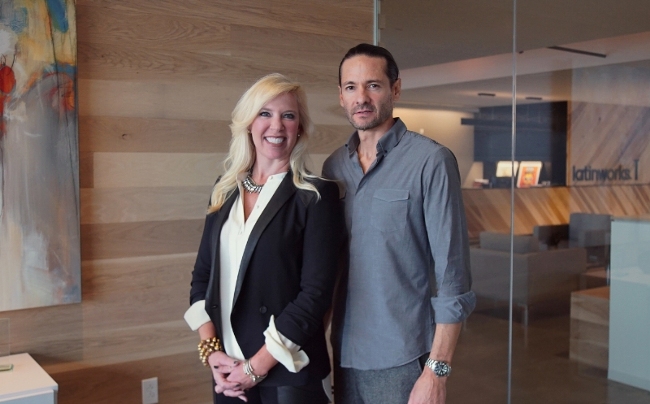 In an effort to speed up the agency’s evolution in the dynamic multicultural space, LatinWorks has announced the appointment of Christy Kranik, a 12-year veteran of the agency, and former Dell marketing executive, to the role of Executive Vice President and General Manager. Joining her leadership team as Executive Creative Director, is Gabriel Garcia, an accomplished and highly respected creative who joined the agency when his former shop, Cultura, was acquired by LatinWorks in 2008.

The news, enthusiastically received by staffers, was communicated this week at an agency wide meeting at LatinWorks new headquarters—perched on a hill overlooking the beautiful downtown skyline in Austin, Texas.

“No one has played a more important role in the development of our culture and the growth of our business, than Christy,” said LatinWorks CEO and Co-Founder, Manny Flores. “Her managerial qualities and relentless client focus will serve us well as we continue the process of strengthening our agency’s offering.”

Recently named to Ad Age’s list of Women to Watch in the advertising industry, Kranik is known for her ability to develop talent, stimulate organizational change, and lead with disciplined focus on clients and their consumers. She is credited with having been an integral part of the formula that has brought LatinWorks unmatched success.

LatinWorks’ positioning as a creatively driven and strategically grounded agency will continue to be at the core of the agency’s DNA. “My goal as the agency leader is to build upon our strong foundation and evolve our offering. Creativity is, and always will be, at the core of the solutions we offer our clients,” said Kranik.

To that end, the appointment of Gabriel Garcia sends a clear message to the industry. “Gabriel is an exceptionally talented creative leader. His people and client skills are only rivaled by his creative qualities. Under his leadership we are confident that our creative product will evolve to be more progressive and consistently effective with the demands of our marketplace,” said LatinWorks CMO and co-founder, Alejandro Ruelas.

“I’m excited to have the opportunity and privilege of working with a very talented team. Together, we will dedicate ourselves to improving our craft and applying it wholeheartedly to the task of creating the kind of business-changing solutions that our clients need,” added Garcia.

The promotion of two long-time LatinWorks executives to critical roles at the agency underscores the depth of talent at the shop, which has been one of the most sought-after creative destinations for talent in the multicultural industry.

After being recognized with multiple Agency of the Year designations, becoming the most awarded shop in its space, and the largest Hispanic agency in 2014 according to Ad Age Magazine, LatinWorks continues to place an increased focus and additional resources to better compete in an increasingly digital consumer environment.  Doing so will help LatinWorks solidify its position as the one agency whose vision of the marketplace best serves the interests of brands pursuing growth. Its already impressive client portfolio includes The Texas Lottery, Domino’s, Target, Anheuser-Busch, and PepsiCo to name a few.