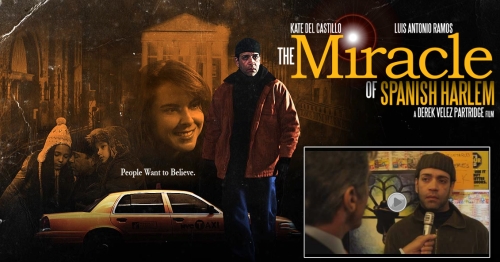 Hispanicize 2012 today unveiled its line-up of feature length, short and documentary films as well as more than a dozen professional development sessions that together comprise the first annual Hispanicize 2012 National Latino Film Showcase.

“This year’s medley of films and sessions represent a strong start to what we feel will be a growing program specifically tailored to advance the careers of U.S. Latino filmmakers and actors,” said Roman Morales, the event’s film curator.  “Hispanicize already gathers so many journalists, bloggers and cultural influencers that it’s perfectly positioned to be the launch pad for the careers of many future Latino directors, actors and producers.”

Latino filmmakers, producers, actors and their films will be showcased on all four nights of Hispanicize 2012, beginning with the world premiere of Kiki Melendez’s The Journey of a Female Comic-La Trayectoria De Una Comediante on April 10th, continuing with Adam Schlachter’s drama Hollywood Whores; and Andres Ramirez’s thriller Unknowns/Los Desconocidos, as well as others. (The roster of films selected for the showcase is at the end of this release).

The stars of this year’s film showcase will shine brightest on the Black Carpet Night of Thursday, April 12 sponsored by BlackBerry.  The Black Carpet will feature a parade of Latino stars, directors and producers followed by the screening of several films on four screens at South Beach’s Regal South Beach Stadium 18.  The event’s Latino Hollywood after party presented by Diageo will immediately follow the screenings across the street at the world famous 1111 Lincoln Road, South Florida’s most famous after party location. (http://www.youtube.com/watch?v=bSaQQ7UA4Xs)

The film is being presented by Bacardi, legendary HATUEY Cuban-Style Ale and Cricket Wireless as a benefit and silent auction for ArtesMiami, Inc. a 501C3 the South Florida non-profit organization dedicated to developing South Florida as a cultural center with a special focus on Hispanic culture.

The privately held outdoor film benefit will exclusively feature sponsors, bloggers, media and VIP guests and will also be the place where organizers will present the winners of the film showcase’s best feature length and short film prizes.  (A Scarface parody YouTube video for the benefit has been produced by Digibunch at http://www.youtube.com/watch?v=cCXAkEvFL5U).

Overall, more than a dozen film and entertainment related panels will be sprinkled throughout the four-day event.  Among the panels are: “From Telenovelas to Mainstream Roles”, a conversation between a top agent and telenovela star making the cross-over into mainstream TV or film;

In addition to these movie industry panels, filmmakers attending the event have full access to attend any of the event’s other sessions relating to social media, advertising, public relations, entrepreneurship and/or blogging.

The Journey of a Female Comic-La Trayectoria De Una Comediante

The life of a Latina female entertainer in America does not come with any guarantees or any easy paths. In Kiki Melendez’ story, she has gone through plenty of disappointments, rejections and heartbreaks, and she has brilliantly translated her adventures into a hilariously funny Movie!  Featured Cast:  Maria Conchita Alonzo, Marc Anthony, John Travolta, Esai Morales, Lupe Ontiveros, Nadine Velasquez, Jacob Vargas (World Premiere)

A chronicle of the Cristeros War (1926-1929), which was touched off by a rebellion against the Mexican government’s attempt to secularize the country. Cast: Andy Garcia, Eva Longoria, Peter O’Toole, Santiago Cabrera, Catalina Sandino Moreno (Sneak Peek Advance Screening Q&A with talent)

A group of young unknown actors arrive in Hollywood and become the unsuspecting participants in a snuff film – theirs.  Cast:  Yeniffer Behrens, Sonya Smith, Gabriel Porras

A gripping documentary about two children in Colombia who must use a cable, which is connected to two mountains, as their only means of travelling to and from the outside world.

The Miracle of Spanish Harlem

Kate Del Castillo (Eva) gives (Tito) Luis Antonio Ramos a second chance at love but he must first overcome a lie and find redemption. This is an emotional drama about a man that tries to make his own miracle, only to find a real one. (Florida Premiere)   Cast: Tony Plana, Andre Royo, Fatima Ptacek, Adrian Martinez, Priscilla Lopez, Geraldo Rivera

When their parents leave them home alone for the afternoon, the Beasley children devise a scheme to sneak up into the attic to uncover their Christmas presents early.   It’s one small step for them, but one giant leap for children everywhere.  Cast: Christian Kramme, Cole Jensen, Rachel & Amanda Pace

‘Lilia’ is a story about a man’s struggle to keep his family together, after losing his job. Cast: Alfredo Lomeli , Aisa Palomares, Lauren Montemayor (Lilia)

From the award-winning creators of GRANDE DRIP comes a compelling short film about friendship, sacrifice, and the importance of significance over existence. An extraordinary story of sacrifice takes place one ordinary afternoon when a young engineer, Dustin Harper, visits his longtime friend, Brady Collins. Their ongoing game of chess is brought to a halt when Brady reveals that his continuing battle with cancer has taken a turn for the worst. The only thing harder than saying goodbye will be honoring Brady’s last request.

Set in the future, an FBI agent must ”jump” across space to capture the creator of a controversial drug that’s taking over the world.

Miami Beach, New Year’s Eve, 1959. Castro’s rebels seize Havana, while the Kennedys, the mob and the CIA all hold court at the luxurious Miramar Playa Hotel. This is Ike Evans’ place, and he used mob boss Ben “The Butcher” Diamond to finance it. With diving clowns by day, and escorts at night, nothing’s what it seems in the STARZ Original Series Magic City. Cast: Jeffery Dean Morgan, Dominik Garcia-Lorido, Yul Vazquez

In 1980 Miami, a determined Cuban immigrant takes over a drug cartel while succumbing to greed.   The 1983 film has become a cult film classic much in the same way as the Godfather has. Cast:  Al Pacino, Steven Bauer, Michelle Pfiffer, Pepe Serna, Mary Elizabeth Mastrantonio, Angel Salazar.

Sponsorship information is still available by emailing sponsorship@hispanicizeevent.com or contacting tel: 203.364.4779.  The conference hashtag is #HISPZ11.  To sign up for conference-related Twitter headlines visit www.Twitter.com/Hispanicize.