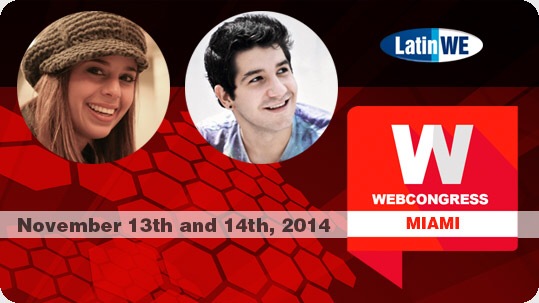 On November 13th and 14th, Elizabeth Gray, Vice President of Production and Content for Latin World Entertainment and Héctor Trejo, known as “Bullysteria,” a Mexican influencer recognized for his leadership on social media, will be at the WebCongress in Miami, FL.

Elizabeth Gray will participate as speaker at the Digital Marketing Summit that brings together media professionals from Europe and America in an effort to update each other about Online Marketing Strategies used by industry-leading companies. Gray, representing Latin World Entertainment, will be speaking about the most powerful digital influencers in Latin America that joined LatinWE Management, and about the creativity, ingenuity and skills they brought to impact different platforms connected to major brands in the Hispanic youth market inside and outside the US.

Héctor Trejo, represented by Latin World Entertainment, has approximately 235K subscribers on YouTube, 200K fans on Facebook, nearly 165K followers on Twitter and 75K on Instagram. Trejo, known as “Bullysteria,” will present alongside Gray to share his personal story, being one of the most popular influencers in the Hispanic market and in contact with brands and media outlets during the height of his career.

Gray and Trejo will be at Miami’s WebCongress and will focus on topics such as: the current relationship between social networks and brands; the creation and production of digital content; current trends in social networks and their leaders; and the emergence of new talents in the online world and its management in traditional and digital media with crossover opportunities to other platforms.

“In an era where the entertainment industry reinvents itself, consumer habits are modernized and youth focuses increasingly on social networks and mobile devices, it was essential to work with digital stars to develop their careers and make them accessible to brands and new projects,” Elizabeth Gray shares with LatinWEnews. She added, “The power of influencers, such as Bullysteria, hits the entertainment world like never before and creates a new way to reach customers, opening a range of opportunities for brands and media.”

Elizabeth Gray and Héctor Trejo will present on Thursday November 13th at 4:30pm EST alongside executives of big brands and companies such as Facebook, Twitter, Sony Music, AOL, Kind, Blueliner, Lyft, Allied Solutions, Zeel, House of Kazen, among others.