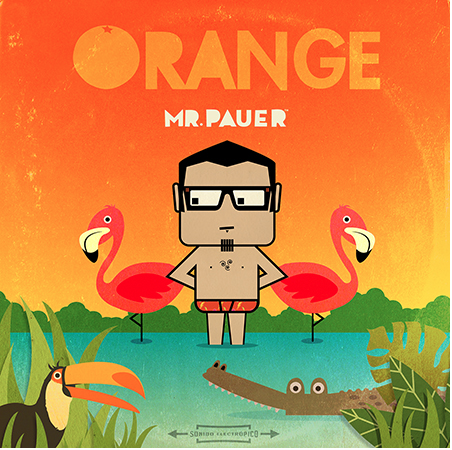 Mr. Pauer announces the release date of his highly awaited sophomore album “Orange” for September 18th on all digital platforms. This new LP, from the producer who was nominated for a Latin GRAMMY® in 2011 for his debut album “Soundtrack”, combines artist collaborations from four continents with different cultural and musical backgrounds, singing in four languages: English, Spanish, Portuguese and Creole. The album was mixed by Mr. Pauer, and mastered by two-time GRAMMY® winner Felipe Tichauer (Ceu, Fela Kuti, Rod Steward, Tom Allen).

“I titled the album “Orange” because it connects deeply with joy, sunshine and the tropics. It is a “Pauerful” color that stimulates creativity, enthusiasm, success and encouragement. The orange is also the fruit that represents Florida, the state where Electrópico™ was born. The physical aspect of the orange represents the union of many wedges coming together to form one fruit; a symbolic representation of the “Pauer” of teamwork in this album”,says Mr. Pauer, while he prepares for his promotional tour starting in early September.

With each of the 14 tracks, the album deepens its multicultural roots with collaborations from many different nationalities with the Electrópico™ seal, and expands its reach to an international audience as well as the cultural melting pot of Miami.