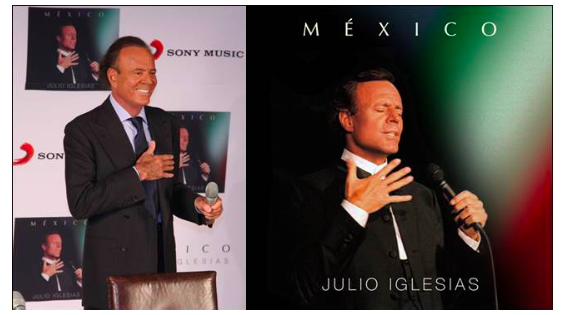 It was a very important day to celebrate, not only due to the release of a new album but also because of his birthday. He had a very Mexican style celebration, with mariachi singing the traditional “Mañanitas” and with everyone present applauding.

With this album, Julio Iglesias renews his ties to Mexico with material from its Golden Age songbook, performed with his inimitable passion. An homage to Mexico’s greatest songwriters, the album includes twelve songs with distinctive Mexican flavor, Julio’s timeless interpretations and a 21st century sound.

Having recorded his first tribute album to Mexico in 1976, the best-selling Latin music artist in history now once again pays homage to a country whose support was instrumental in his rise to fame.

While putting the finishing touches on México, he noted that “Mexico is a country that I love dearly. The Mexican people have given me many indelible moments in my life. I know this country as if it were my homeland, and I always carry it in my soul.  Mexican music is universal and its composers are legendary,”

With this album, Julio Iglesias’ discography surpasses 80 albums since 1968, a sterling body of work. A total of 47 years of hits and record-setting accomplishments, with over 300 million records sold, solidifying Julio as the best-selling Latino artist in history, and one of the Top-10 best-selling music artists of all-time.

México is a return to fundamentals for an artist who has sung in over 12 languages and won a multitude of accolades around the world. Now, Julio Iglesias ends his long absence from recording, by again embracing his beloved Mexico and its classic songwriters.

Julio Iglesias will support the new album release with a series of highly-anticipated concerts, returning the legendary vocalist to stages across Mexico: