Jorge Ramos and Lynsey Addario to be honored at ICFJ Awards Dinner in D.C. for their impact 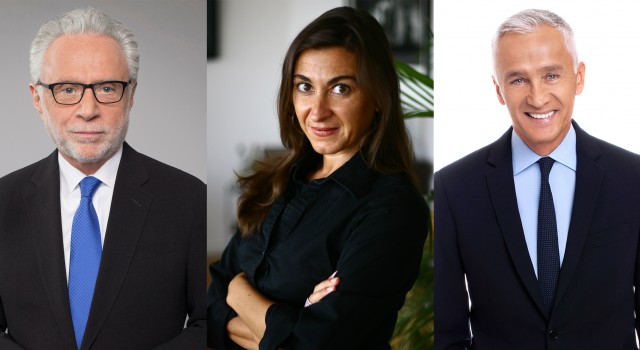 Jorge Ramos, known as the “Walter Cronkite of Latino America,” and Lynsey Addario, whose photographs have put a human face on war, will be honored by the International Center for Journalists (ICFJ) at its Awards Dinner on Nov. 10 in Washington, D.C. CNN lead political anchor Wolf Blitzer will emcee the annual gala. At the event, ICFJ recognizes journalists or media innovators whose work has had tremendous impact. Ramos, anchor and reporter for Univision and its English-language offshoot, Fusion, will receive ICFJ’s Founders Award for Excellence in Journalism. For three decades, he has covered issues vital to the Latino community. Addario, a Pulitzer Prize-winning photographer, will receive an award for Excellence in International Reporting. “It’s a privilege to honor these two world-class journalists,” said ICFJ President Joyce Barnathan. “They routinely go above and beyond to shed light on important issues that often don’t get enough attention.” Adds Rob Rehg, ICFJ’s Dinner Chair and Edelman’s Regional President (Washington, D.C.): “Our honorees this year are truly inspiring and set the standard for the profession.” Ramos, a native of Mexico who became a U.S. citizen in 2008, has been an anchor of “Noticiero Univision” since 1986. He has interviewed a long list of world leaders. Millions in the United States and in 13 Latin American nations view his newscasts. Time Magazine just named him one of the 100 most influential people in the world. The New York Times called him “the voice of Latino voters.” Ramos has covered presidential elections and major international news events from the fall of the Berlin Wall to the devastation of Hurricane Katrina. He also anchors a Sunday news analysis show, “Al Punto” (To the Point). His weekly column is distributed by The New York Times Syndicate to more than 40 newspapers in the United States and Latin America. He also is the author of 11 books. Addario is a U.S. photojournalist whose work appears regularly in The New York Times, National Geographic and Time Magazine. American Photo Magazine named her one of the five most influential

photographers of the past 25 years. Her photographs, which have focused on conflicts in the Middle East, South Asia and Africa, are widely credited with showing the human toll of global strife. She was part of The New York Times team that won the 2009 Pulitzer Prize for International Reporting for her photographs in a series called “Talibanistan.” Addario’s first book, “It’s What I Do: A Photographer’s Life of Love and War,” was published in February. It is scheduled to be made into a movie starring Jennifer Lawrence and directed by Steven Spielberg. The ICFJ Awards Dinner is Washington’s top international journalism event, attracting 600 media luminaries and supporters. ICFJ will also honor the winners of the Knight International Journalism Awards, to be announced on May 18. ICFJ is delighted that The Coca-Cola Company is the gala’s corporate chair. To learn more about the Awards Dinner or to purchase a ticket, please visit www.icfj.org/dinner.