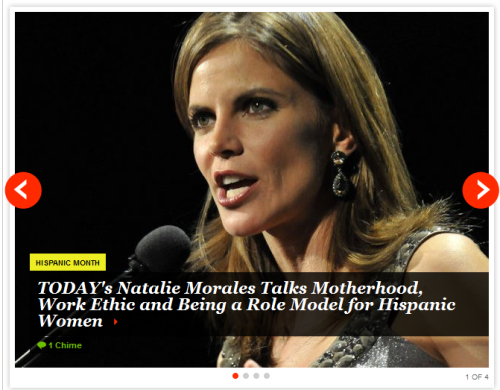 iVillage celebrates Hispanic Heritage Month by welcoming prominent Latina online publisher, Angélica Pérez, as its newest addition to iVoices on iVillage, a diverse team of 25 women and men who chronicle and share the ‘real’ stories and issues that resonate most within their communities.  Pérez will contribute each week with videos and blog posts on Hispanic-themed stories, from discussions centered around the importance of extended families in the Latin home to education and career goals of today’s bicultural woman.

As the iVoice for Hispanic-focused stories, Pérez will conduct a series of high profile video interviews with three of today’s most prominent Hispanic women in media, including TODAY’S Natalie Morales,  CNBC’s Michelle Caruso-Cabrera and Telemundo Chief Operating Officer, Jacqueline Hernández.  Each interview will delve into their career success, major milestones in media pertaining to Hispanic relations as well as addressing the 2011 Census findings and how they are shaping journalism today.  Each exclusive video interview will be available for viewing at iVoices on iVillage.

The iVoices program puts the power of storytelling directly in the hands of iVillage’s most outspoken community members, as they contribute blogs and videos on a spectrum of topics, from back-to-school trends to the war in Afghanistan to postpartum depression.  Each uniquely personal story is featured on iVillage and can also appear on local NBC news stations around the country, as well as extended digital outlets across NBCUniversal.

“We recognize the power of the Hispanic market throughout the country, and we knew there was no better time than the present to have our signature program, iVoices, reflect and celebrate all Hispanic oriented topics, from raising bilingual children to the importance of family traditions in the Hispanic home,” said Kelly Wallace, iVillage Chief Correspondent and Executive Producer of iVoices on iVillage.

Angélica Pérez, PhD, (@NewLatina) is a mother of four and is an accomplished, practicing Clinical Psychologist and certified Life Coach, as well as the publisher and CEO of NewLatina.net, a personal growth and lifestyle online destination for today’s Latina.  Pérez is also the force behind the Understanding Today’s Latina Survey, which took a deep dive into the challenges, goals, needs and socio-demographic profile of Latinas in social media.  Pérez is the creator of “Mentoring Hermanas” and the “Latina Online Business Directory,” two platforms that support and promote the entrepreneurship spirit and efforts of the New Latina community.  Pérez has shared her clinical expertise in appearances on Univision, Telemundo and HITN (Hispanic Information and Telecommunications Network).  She is a regular contributor to HuffingtonPost.com and other online publications.  She has delivered over 100 workshops, training sessions, and presentations at community-based organizations, healthcare facilities and regional and national conferences. Pérez is a native New Yorker, of Dominican descent.

In support of NBC News’ “Education Nation,” Perez and Kelly Wallace will join fellow iVoice members, Beth Engelman, Brandi Jeter, Celena Gill and Sharon Rowley for iVillage’s coverage of the entire three-day New York event. They will be attending each of the break-out sessions and tweeting and blogging throughout the entire summit.  Each iVoice will also write a post on issues important to them regarding education.  Perez will write about ‘College Prep: It’s Never Too Early;’ Rowley, ‘Teaching Spanish, French, Mandarin – Anything!’ Jeter, ‘Pay To Play, Pay to Learn’ and Engelman ‘The Importance of Play.’