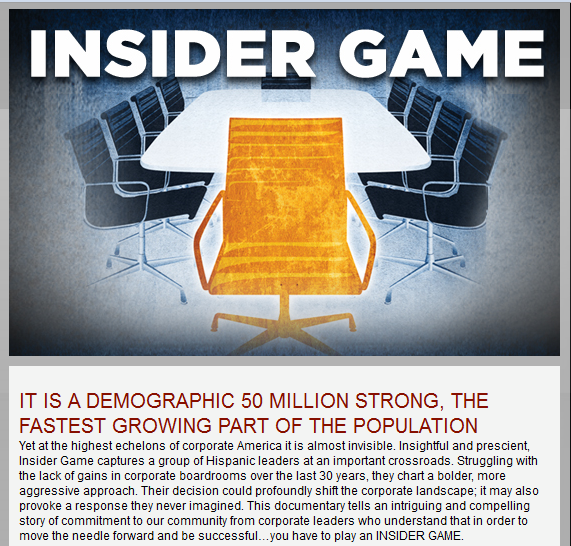 Insider Game, a powerful, short documentary film by the Hispanic Association on Corporate Responsibility (HACR) and Impacto Group Productions takes a unique look at the lack of Hispanic inclusion in Corporate America. The film premiered this past Saturday at the annual conference of the National Society of Hispanic MBAs (NSHMBA) in Anaheim, and can be viewed at www.insidergame.org.

The documentary captures insights and strategies from corporate executives with first-hand knowledge about the need of diversity and inclusion at the highest corporate ranks.

“Although Hispanics are the largest minority community in this country – 50 million strong and the fastest-growing sector of the U.S. population – we are underrepresented in almost every sector of our country,” said HACR President and CEO Carlos F. Orta.  “This is our time. We need to step up to the plate and we need to own it.”

Filmed on location in Los Angeles, California; Miami, Florida and Washington, D.C., the documentary tells an intriguing and compelling story of corporate leaders who understand that in order to move the needle forward and be successful, you have to play an insider game.

Insider Game is one of the components of HACR’s Advocate campaign, an initiative that highlights the need for support from all sectors to ensure Hispanics are fairly and prominently included at the highest corporate levels, form the boardrooms of large corporations to the halls of Wall Street.  The campaign’s call to action is to jump-start the dialogue for diversity and inclusion in the ever-changing American demographics.

RECAP: Gloria Estefan & NY Metro McDonald’s give back to the community