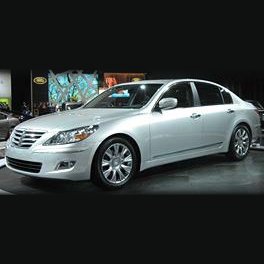 Hyundai views Latino car buyers as important to the success of Genesis, the new luxury brand the South Korean automaker is launching in the United States, a top executive of the company said here.

The company has data showing that purchases by Hispanics accounted for 68 percent of the growth of Hyundai’s U.S. sales in 2013-2014, he said.

“It’s an honor that the Hispanic market has responded the way it has to the Hyundai brand and we will continue doing the same promotion, and even more, with the Genesis brand with the hope that Hispanics consider our new luxury brand,” Evans said.

Hyundai launched the new brand, which takes its name from the company’s Genesis luxury mid-size model, with the presentation at the auto show of the full-size G90 sedan.

Both engines are coupled with a second-generation 8-speed automatic transmission.

The introduction of the G90 marks “a big step in our evolution as a company,” Evans said.

“We’ve spent the last 15 years trying to design the best vehicles in the world. We put the Hyundai Genesis on the road and later the Hyundai Equus, and in recent years we have been refining those two products to produce vehicles that can truly be sold in the luxury category,” he said.

Evans added, however that the automaker is well aware of how competitive the luxury market is.

“We really understand that the world of luxury automobiles is very competitive nowadays. We also understand that there are customers who are looking for a product with the highest engineering at a very value-oriented price,” the executive said.

“And in the second place, there are customers who look for technology centered on the human being, technology that is designed to make their lives less stressful, that makes the experience of driving a vehicle easier,” Evans said.

Hyundai’s experience with the original Genesis model has been definitive, giving the automaker confidence to embark on the ambitious venture of creating a new luxury brand.

The G90 is “the flagship of the brand. It’s in the highest end of the market for sedans. The competitors are the Audi A8 or the BMW 7 Series,” Evans said.

“And we have announced that by the end of 2020 we will have three sedans, of which the G90 is the largest, and two all-terrain vehicles as well as a coupe that will be based on the prototype that we can see here,” he added.

“Currently with the Genesis model we are present in the mid-size luxury segment, such as the Series 5 BMW or the Mercedes E Class, he said.

“Today we are third out of 14. We have grown very quickly in that segment to reach the point where we are,” Evans said. “That gives us a lot of confidence that we will be capable of doing that in all the luxury segments where we will be present during the next five years.”