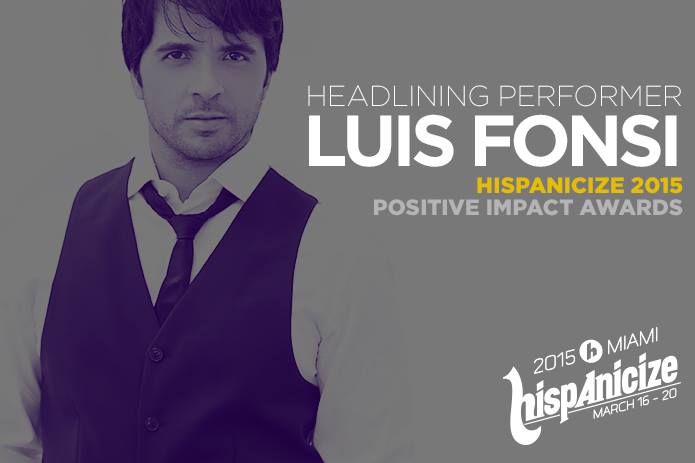 Organizers of the Hispanicize 2015 event today announced that Latin GRAMMY-winning Puerto Rican singer Luis Fonsi will headline the second annual Positive Impact Awards, a national program presented by 3M that recognizes outstanding Latinos who give back to their community selflessly and in big ways.

Luis is regarded as one of Latin music’s biggest stars. In his nearly 20-year career in music, Fonsi has had a continued presence on the charts. He has earned multiple platinum and gold records in Mexico, Spain, U.S. and Puerto Rico and holds the longest running No. 1 on the Billboard Latin Pop Airplay chart for “No Me Doy Por Vencido,” which spent 30 weeks at the top in 2008. In May 2014, the Latin GRAMMY winner released his latest album, 8 which included collaborations with Juan Luis Guerra.

“Having Luis Fonsi perform at our Positive Impact Awards is a perfect fit. He is the epitome of a Latino who is making a positive impact in the world, not only through his music and great talent, but also through his various causes and charitable contributions,” said Hispanicize Event’s Executive Music Director, Katherine Johnson Gunn.

Since 2006, Fonsi has lent his voice and image to help the children of St. Jude. He was one of the first Latin celebrities to adopt the mission of St. Jude as his own. In 2009, he became an official spokesperson of the Thanks and Giving® campaign, a national initiative that asks the community to “give thanks for the healthy kids in their lives and give to those who are not.”

“I am truly honored to receive the Positive Impact Award from Hispanicize, and happy to share my music at this Gala,” said Luis Fonsi.

Currently Luis Fonsi is promoting his latest album “8”, through an extensive tour “Somos Uno”, with which he has had the pleasure to visit various countries in South America. This coming 14th and 15th of February he will perform at the Coliseo in his native Puerto Rico.

The Positive Impact Awards red carpet night begins at 6:30pm on Thursday, March 19th at the InterContinental Hotel in Downtown Miami. Tickets for Hispanicize 2015—an event that brings together Latino trendsetters in the fields of music, film, tech, journalism, PR and marketing, and brands—are on sale at www.HispanicizeEvent.com. Hispanicize runs from March 16th-20th. In addition to Luis Fonsi, the awards gala will include several celebrity appearances as well as an opening performance by the Cuban band PALO!

Vote for Positive Impact Person of the Year

Beginning February 5, 2015, the public will have the chance to vote from among the winners for Positive Impact Person of the Year. The winning nominee will be announced during the Positive Impact Awards gala, sponsored by 3M, which will take place on March 19, 2015 at 7:00 p.m. at the Intercontinental Miami Hotel. To vote, visit: www.hispanicizeevent.com/pia.

The Positive Impact Awards were created in 2013 in honor of the late Louis Pagan, co-founder of Hispanicize and a well-known social media entrepreneur, who passed away suddenly in February 2013. Louis was widely known for his kindness and commitment to giving the community a voice through his vast social media networks. In the same way, the Positive Impact Awards recognize those who contribute selflessly for the betterment of their community.